'See' the Sound Waves and Improve Your Scales

Why is it that students of any musical instrument seem to dislike the idea of practising scales?
They are often viewed as a chore, and something to 'get through', before more interesting practice can be undertaken.
But all students need to understand the benefits they will gain, by dedicating a section of their daily practice routine, to this essential task.

As Andres Segovia once said:

"The practice of scales enables one to solve a greater number of technical problems in a shorter time than the study of any other exercise."

So, on the classical guitar, and any other instrument, students really need to start viewing scales as their friend rather than their foe.

I thought it may help if you could visualize a scale: 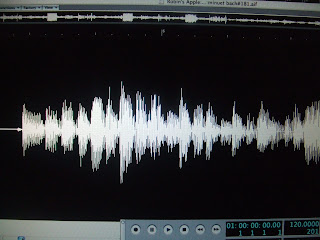 From this example, you can see how uniform the sound waves are, equally spaced, and each note separate and distinct.

Now, if you look at the next wave form you'll immediately see the difference: 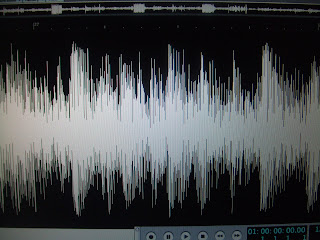 This looks very different because there is an awful lot going on!
It is the wave form for a rasgueado.
The waves are larger due to the increased volume, but, you can also see that so many notes are being recorded in the same fraction of a second, that it's hard to distinguish each individual one.

Robin is an advocate of 'silent practice', and, 'hearing' the notes in one's head a split second before playing them.
Now, you can keep these sound wave images in your mind and try to 'imagine' the regular and even form that your scales should take.
Good Luck!
Posted by Anna at Thursday, October 25, 2007