Dance of the Jaguar - Robin Hill 'Standing on Air'

'Dance of the Jaguar' is the 5th track on 'Standing on Air' and was initially inspired by many visits to Mexico and Costa Rica and by a beautiful wooden Jaguar head that Robin found in Mexico. 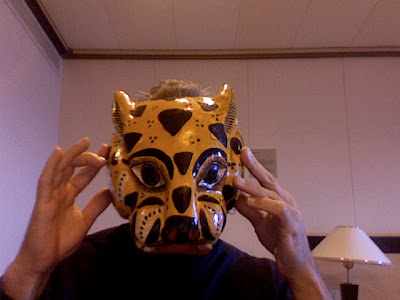 The piece itself contains an eclectic mix of ideas ranging from flamenco to Indian influences.
The dramatic opening certainly conveys a musical impression of high tension, I should add that Robin has always been fascinated by the Mel Gibson film, 'Apocalypto', and this whole piece seems to follow Jaguar Paw as he struggles with pursuit and then enjoys fleeting moments of respite.
The use of music within a filmic context can make or break a sequence, and sometimes a film itself can inspire new music.

Very soon tabla drums enter the piece to give a driving rhythm for the guitar riff to adhere too. This is then joined by the sitar.
Robin has had both the tabla and sitar for some time and had been waiting for the right opportunity to use them.
I feel they work very well in the context of this piece.

This piece is in ABA form, representing Yin and Yang. The second section being a release of the tension before an intermediary connecting section with improvised guitar solo. This leads into the final triumphant conclusion.

For those interested in the recording side of things, quite a few takes were required to get the bass unison with guitar in the rapid triplet section. But I feel the overall effect was worth the effort and it is used a couple of times.

The sitar has long been an instrument that we both love. We have spent many hours listening to Ravi Shankar, Anoushka Shankar and of course followed George Harrison's love of the instrument.
Although I should say that initially I was reluctant to add sitar to the piece.
I am so pleased that I was overruled as the snatches of sitar add perfect spice with its distinctive sound.

As you can imagine we have both listened to this piece many times during the recording, editing, mixing and mastering process.
From the whole album this is the one piece that Robin has mentioned that he may develop the idea into a concerto movement...

But for now, you can find the CD 'Standing on Air' and the track, 'Dance of the Jaguar' in many places, these are just a few: Robin Hill site, iTunes, Amazon, CD Baby etc....
Posted by Anna at Monday, March 12, 2012 No comments: