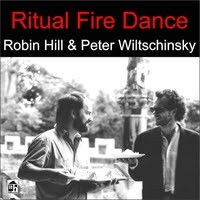 This album was recorded without any edits, and on one track minus a shirt...all the playing is real and as it happened! The cover photo was taken at Hampton Court Palace during a break from recording in the beer cellar for BBC Radio.

The album also features a traditional Jota, arranged by Hill/Wiltschinsky and two Elizabethan lute duets, the first, Le Rossignol is anonymous and the second, My Lord Chamberlian's Galliard by John Dowland.

The opening Scarlatti sonata was the product of many hours recording and finally the duo got it to their satisfaction. Robin sprang out of his seat to celebrate, went straight to an upright piano in the corner of the room and started to play some boogie-woogie. After some time an inexperienced, stand-in engineer announced to the studio, "You'll be pleased to hear I recorded that." "Not over the Scarlatti I hope?" replied Robin.
Unfortunately it was...
The duo had to start the process all over again, but a fine version resulted.

After finally getting the second Scarlatti recording the duo decided to have a break, as it was late in the evening by this point. They visited a local pub, had a few beers and returned to the studio where they then recorded Felix Mendelssohn's beautiful 'Song Without Words'. I feel this actually added a certain mellow dimension to the recording.

For some inexplicable reason, during the recording of Mauro Guiliani's Variazioni Conertanti, track 13, Robin's microphone was picking up the friction between his shirt and guitar quite loudly. After much experimentation he eventually took his shirt off and recorded the track bare chested which seemed to solve the problem!

The traditional Jota, track 3, with its blistering triplet variation was recorded first take!

The Ritual Fire Dance, track 15, was played for many years by the duo as the final item on their programme and always elicited an encore.

You can hear excerpts of this album on iTunes, Amazon and all the usual digital outlets.

Here are the liner notes, by John W Duarte:

Spain is the only country in which the guitar, in its various evolutionary forms, has played an uninterrupted part in the national music culture, yet the common description of the guitar as “Spanish” does not truly accord with the historical facts. The early (four and five-course) guitars were in use throughout Europe, the instrument in its present “classic” form probably first appeared in Italy or Austria, and only in the last decades of the 19th century and the first few of the 20th might it be said that the guitar’s centre of gravity lay firmly in Spain. Andrés Segovia reminded the rest of the world that the guitar is a beautiful and resourceful instrument, and that they were wrong in having allowed it to fall into neglect. The lesson was quickly learnt and the guitar resumed its internationality; it is now a “world” instrument in every respect, but it is from Europe that its 20th century gospel has spread.

The guitar, like the keyboard and the harp, is both a melodic and a harmonic instrument, which permits it to “borrow” music written for other media, and to present it with a fresh face. Most of Domenico Scarlatti’s 555+ sonatas for the harpsichord (another plucked string instrument) were written in Iberia, to test the mettle of his pupil Maria Barbara (a Portuguese princess who later became a Spanish queen). The didactic purpose of the Sonata K141 is clear, the rapidly reiterated notes: in some other sonatas Scarlatti marked such passages: “mutandi i detti” (alternate the fingers), which is exactly what a guitarist does here! Duets for two plucked-string fretted instruments have been a companionable activity for many centuries, a Canone a due liuti is among the works of Francisco Canova da Milano (1497-1543) and, such instruments being portable, they have been beloved of friendly amateurs - like Jane Pickering, who enjoyed making music with her friends and in whose lute-book (c1616) Le rossignol (the nightingale) is to be found. It is an ‘equal’ duet, in which the two players ‘converse’ on an equal footing. Duets in which both players share the same instrument (e.g. four hands on one piano) came later. John Dowland, the greatest lutenist of his time, may have been the first in the field with My Lord Chamberlaine his Galliard, “an invention for two to play upon one lute”, another ‘equal’ duet, in which the players balletically exchange roles - but not here. The music is sufficient in itself and the humour is in any case not visible in a recording!

Much keyboard music translates to two guitars, and when it is of a romantic character the marriage is a particularly happy one, as it is with the Song without Words Op19/1 of Mendelssohn. His eight cycles of Lieder ohne Worte are a recognition that an instrument, no less than a voice, can ‘sing’, as one guitar does here whilst the other provides the accompaniment. The sound of the guitar is rooted in the consciousness of most Spanish composers, so that two guitars can convincingly project the essence of the exciting Ritual Fire Dance from Falla’s ballet El amor bruno (Love the Magician), without need of the weight of sound of the original orchestral form.

Traditional songs and dances are not the special ‘property’ of any particular musical medium, but may happily be dressed in a wide variety of ways. The Irish folk song, The Lark in the Morning, with its bird-like trills, and the Jota, a Spanish dance whose simple ground opened the door to some flamboyant variations, provide excellent and contrasted examples of what may be added to such material through creative arrangements for two guitars.

When it comes to music that is directly written for the guitar, no-one does it more effectively than a composer who plays the instrument and knows its capabilities intimately. Fernando Sor, a Spaniard whose career carried him as far east as Russia and as far west as London, wrote 13 Fantasias of which the Fantasia Op.54 bis is the only one for guitar duo; the theme of the final movement was used by the Danish choreographer Auguste Bournonville in his ballet The Toreador (1840). Mauro Giuliani, an Italian virtuoso who moved to Vienna to enhance his career - and back again to Italy to escape the arm of the Viennese law, is often referred to as Sor’s “rival”; be that as it may, they were the two leading players of their time. Giuliani’s prolific compositional output (he had an avid Viennese salon public to satisfy) included many sets of variations; In the Variazioni concertanti the theme (probably Giuliani’s own) is preceded by an imposing introduction and followed by six contrasting variations in which he exploits the technical potential of two virtuoso players - who may originally have been Giuliani himself and his daughter Emilia.

Among the later guitarist/composers who have written for the duo medium are: Dimitris Fampas, whose romantic and ‘stateless’ Fantasie (dedicated to the Greek duo Evangelos and Liza) bears no trace of his Greek origins, Jan Marten Komter, the Managing Director of a Dutch chemical firm, amateur guitarist and flautist, the composer of the Milan Suite, with its overt references to the pavans of its eponym, the 16th-century Spanish vinuelista Luis Milan, and Robin Hill, whose Rondo for two guitars is in the classical mould (with earlier Iberian echoes of Padre Antonio Solar), and whose charming Canzone is one of a set of three studies for two guitars.

The remaining music on this disc is by composers that did not play the guitar but who nevertheless wrote generously for it. Jean Absil, a Belgian, composed for most musical media and his style ranged from the uncompromising to the accessible - as it is in his Three Pieces (1963) for guitar duo, from which the Musette comes; the pieces carry “baroque” titles but the music fulfils neither the promise nor the threat (according to your point of view!) of matching pastiche. Pierre Petit, erstwhile Director of Light Music for French Radio and TV, critic and composer, was one of many who were inspired to write for two guitars by the Duo Presti-Lagoya (which ended with the death of Ida Presti in 1967). The driving rhythms of the outer sections of his Toccata are interrupted by two slow, jazz-tinged episodes, and the work ends in a blaze of virtuosity. Mario Castelnuovo-Tedesco, a refugee from Mussolini’s Italy, emigrated to the U.S.A., finally settling in Beverly Hills. In his prodigious output of music he was unusually generous to the guitar; in this the original catalyst was Andrés Segovia, one of those who sponsored his entry into the U.S.A., but in the last year of his life he was equally captivated by Presti-Lagoya for whom he wrote (amongst other things) Les guitares bien-temperees, Op.199 (1962), prelude-and-fugue pairings in all major and minor keys. In this he followed the example of Bach’s Das Wohltemperierte Klavier but the pairings are differently ordered thus the Prelude and Fugue in F# minor are No. 13 in the series, not No. 14 as Bach had them. Neither is the musical language of Bach, it is Castelnuovo-Tedesco’s own.

'She Loves You' from 'Classic Beatles' by Robin Hill & Peter Wiltschinsky

Today we thought it would be nice to hear one track in its entirety and accompanied by some photographs of the duo taken over the years.

'She Loves You' is a favourite of most Beatles fans and therefore required a sensitive approach to maintain the essence of the piece.
In this arrangement, by Robin, he uses many techniques to grab the listeners attention, such as the canon, counterpoint and some breath taking triplets at about a minute in.

You can hear more examples from the album on iTunes, Amazon and in fact many digital outlets.

Also, for those who may want to try playing these pieces, or many others, there is a large catalogue of sheet music on our website, under Hillhouse Editions Sheet Music.