Today is a very special post by the man himself - Robin Hill!

It was originally written as a guest blog for the Australian violinist Ben Clapton, back in 2007.

When approached by Ben, to write a guest blog spot on ‘practice tips’ for the classical guitar, I wondered where to start.
Having written an entire book, ‘The Guitar Gymnasium, A Mental and Physical Workout, Designed to Develop Flawless Technique,’ published by Mel Bay, it seemed a difficult task to summarise into an article.
Most of my thinking on these matters has been precipitated by the ‘front line’ experiences of concertising, recording, broadcasting and teaching, and a life long passion for the classical guitar, and music in general.

Outstanding performance on any musical instrument can only be achieved through hard and painstaking work. The musician who excels above his colleagues is, generally, the one who has taken more pains.
Regular practice is essential, with technical work of high priority, and whilst students may not want to hear this, there is no escape from scales and arpeggios!

One of the most basic and important principles in guitar technique is economy of movement, not only of both hands, but, of any part of the body involved in the production of the note.
It’s worth investing in a full length, movable, mirror, as I watch myself playing frequently, not out of vanity, but to constantly check positioning and posture.
For practice, I’ll break it down into sections, and start with the arpeggio.

The right hand should remain completely stable with the knuckles immobile and parallel to the strings. The fingers themselves move in a minimal way, pressing, rather than hitting the string.
Initially you can practice this silently by touching the string but without producing any sound.
This helps to establish playing ‘from the string’ and using the minimum amount of movement.
Silent practice should be accompanied by ‘hearing’ the notes mentally, and thus, reinforcing the inner ear.
In fact it is always good practice to ‘hear’ notes in one’s mind a split second before playing them.

Initially the arpeggio should be practiced slowly, gradually increasing the tempo, and the use of a metronome is recommended, but not all the time.
Fluency, technical command and accuracy are paramount.
Variety in practice is important, try to surprise your fingers with new challenges and studies, but always practice attentively. Be aware of the deadly routine of wading, without concentration, through studies and exercises.

So regular technical exercises are essential. But one doesn’t need to have an instrument in one’s hands to practise, particularly in the field of memorization.
I personally derive a great deal of benefit from not only ‘playing’ a piece mentally, and hearing the sound and timbre of the notes, but also in imagining a successful concert scenario.
Even when practising with the instrument I feel it is an intellectual rather than a physical exercise.

The temptation to play a piece up to tempo should be resisted, as unless the technical and musical foundations have been laid we will not gain mastery over the music.
The repetition of, ‘hit and miss’ renditions, only serves to ingrain bad habits further.
Difficult passages must be played slowly, with phrasing and musical expression, to prevent the bad habits developing.

One never arrives at the point when one can say, ‘I can now play,’ it’s a lifetimes work for anyone, whoever they are, and one’s ideals are often subtly changing.
I am frequently asked how much practice should be done each day, but it is, of course, quality and not quantity that is paramount.
Generally I practice no more than one hour at a time, but it is a pointless exercise, unless concentration and attention are maintained.
Over an average day I would practise at least five hours, about half the time on technical work, and the other half on musical aspects (learning new repertoire, maintaining established repertoire etc.)

I strongly recommend reading and re-reading every possible tutor and manual on playing and technique. Not just for the guitar, but different instruments, particularly the violin and piano, as there are very often common principles to playing any instrument.
It is impossible to overestimate the importance of going to hear and see as many first class players as possible, of any instrument, as this is one of the most exciting and inspirational ways to learn.
But it is also important not to forget one’s original inspirations and to refer back to them often. They are, after all, the reason you play, and generally, you will still find them inspiring.
Listen and luxuriate in your favourite recordings and let them fuel your enthusiasm. Although there are now many fine players of the guitar worldwide, it is still, unfortunately, rare to get the chance to see and hear them. If you do get the chance, make sure you take it and hear them live, it’s worth a million CDs.

Also play with other musicians. The guitar combines particularly well with the violin, the voice, the flute, the mandolin, the recorder, the oboe and with all manner of small chamber ensembles. This will open you up to the full musical picture and not just ‘your’ part, increasing your appreciation and pleasure on the way.

Much of the information I have discussed today, has come from my book, which also has all the technical exercises, I work through each day.
I will also be going into more detail about practice and performance over on my blog in the next few weeks and months.
But for now, many thanks to Ben for the invitation, and, happy practising!
Posted by Anna at Monday, October 19, 2009 1 comment:

If you are in the North West of the UK and want to liven up your lunchtime this Thursday, 15th October, then why not go to a concert.

It is the last chance to see Robin perform in the UK this year, so if you can make it, the place to be is St. Andrews & St. George's Church.

Lunch will be served from midday and the concert starts promptly at 12.45, finishing at 1.30.

The programme will include Renaissance Lute Pieces, Tarrega, Dilermando Reis, Iradier, Sabicas and some traditional flamenco, so is an ideal way to brighten up your Thursday.
Posted by Anna at Wednesday, October 14, 2009 2 comments:

The years and years of dedication to your instrument can result in some very special events.
To be booked to play at a private party on a private beach was one such occasion.

Robin was flown from the UK, whilst Izzy Cooper arrived from Spain, and with only two days rehearsal it was a pretty tight schedule.
However, they have performed together before and had been working on their parts separately for some time.

By all accounts it was a fabulous evening. But then with such a beautiful backdrop everyone was bound to be moved: 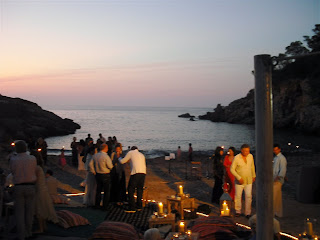 As Robin and Izzy performed the sea rolled gently in behind them and after the interval Robin couldn't resist informing Izzy that the waves were now only a matter of feet from them....
Ever the professional, and also used to Robin's sense of humour, she managed to remain calm and they finished the programme without getting their feet wet.

Whilst not rehearsing Robin could sit back and enjoy the view from his hotel: 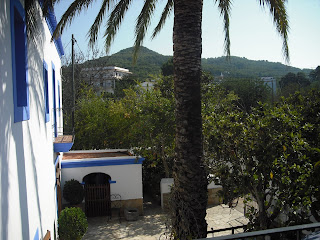 And in fact spoke to me a number of times from his balcony: 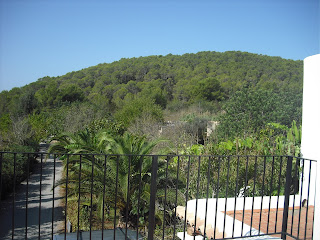 But this was always going to be a busy weekend.
The next morning Robin had an early flight to Stansted as he was performing a concert that night at the Rhodes Art Complex, Bishop's Stortford.

They had thoughtfully put a poster in the window so that the travel and work weary musician knew he had arrived at the correct destination: 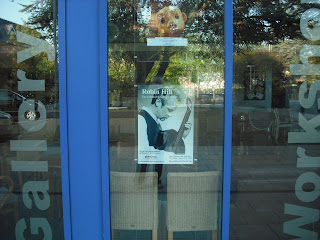 As I write Robin is off on his travels once again and can currently be found somewhere in Canada.
But more of that trip on another occasion.
Posted by Anna at Wednesday, October 07, 2009 No comments: