'Chill 22' - Robin Hill from the new album 'Standing on Air'

Today we released a video of 'Chill 22', the first track from the new album 'Standing on Air'

The album itself, featuring all original compositions by Robin and on which he plays all the instruments, will be available in January 2012, but we thought it would be nice for you all to have a sneak preview.

This composition was inspired by Robin's newly acquired Manuel Reyes guitar which was made by the master luthier in 1963. This instrument is capable of producing not only the aggressive rasp of the Andalusian flamenco, but also a beautiful sweetness of tone when played with sensitively and expression.

As he was in a hotel at the time, the title of the track was taken from his room key and initials, 'Chill 22', his first name being Charles.

As time went on the piece evolved.

Chill 22 has a laid back jazz groove yet the incisive triplets and use of rasgueados reflect Robin's love of flamenco music. The cuica drum, rainstick and shakers are Brazilian inspired.

Alongside these latin and flamenco elements you may also discover a quote from Igor Stravinsky's, 'Rite of Spring'.
This is one of Robin's favourite classical pieces and the tongue in cheek reference opening the guitar solo pays tribute to this.

Generally the album as a whole not only reflects Robin's diverse musical tastes but also his constant extensive travelling.

The influences of many countries can be heard in each and every track and he often returns home with an indigenous instrument from some far flung land.

Chill 22 also features a Neapolitan mandolin.
Back in 2008 Robin was in Sorrento when he came across the most beautiful mandolin.
The story about how we came about purchasing it is quite amusing, and restores ones faith in humanity.
Here's 'The Mystery of the Mandolin'.
The use of the mandolin was also an opportunity for Robin to use his enviable plectrum technique acquired after many years of playing electric guitar....

You will have to wait a little longer to hear all 14 original compositions from, 'Standing on Air', but for now, sit back and enjoy 'Chill 22'.

'The Scale' from The Guitar Gymnasium - Robin Hill

Some time ago I wrote a post on 'The Arpeggio' and promised to follow up with one about scales.

So here it is!

Scales are a vital part of any practice session and should be treated with respect.

As Andres Segovia once said,

'The practice of scales enables one to solve a greater number of technical problems in a shorter time than the study of any other exercise.'

Below are the first two pages of Chapter 2 of The Guitar Gymnasium.

The entire chapter consists of 16 pages of explanations and guidance, the occasional inspiring quote, 13 original exercises and a few old favourites.

The original exercises have been designed by Robin to achieve many things.
Some are excellent warm-up and stamina building exercises, others concentrate on avoiding awkward string crossings by examining technique.

You can click on the image to enlarge if required. 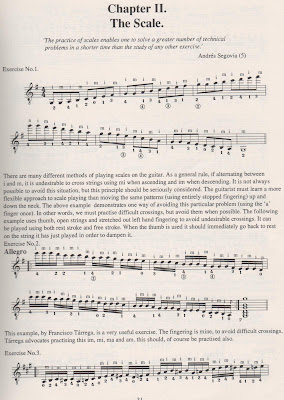 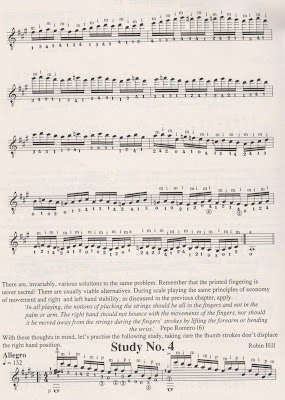 He finishes the chapter with the demanding scale workout by Nicolo Paganini, 'Moto Perpetuo', which he has transposed from C major to A major and fingered to facilitate fluency and velocity.

'Life of a Musician' - 5 Years of Blogging

Life of a Musician is 5 years old today!

So, I thought I would have a look back through some of the 717 posts and highlight a few that represent a cross section of the last 5 years.

To start with you might like to listen to some of the pieces in the player in the sidebar. If so, this post, 'Stories Behind the Music' tells you a little about each piece.

Also in the sidebar are some of our CDs which can be accessed by clicking the various links.

But apart from the music the whole point of this blog was to look behind the scenes at the life of a musician and to record some memories and thoughts from a career that has spanned more than 40 years...


'Accidents Happen: Part 1' seemed a good place to start.
And then there was, 'Part 2'.

I'm not saying Robin is accident prone but this post tells about the time he split his guitar - during a concert...and this one how he found himself, 'Recording for Teldec with a Sutured Finger'.

Travel obviously forms a huge part of the life of this musician. Generally this is an honour. He visits more countries each year than most people manage in a lifetime. But it isn't without its stresses.
We have had 'lost guitars', and more lost luggage than I care to remember, here's just one example, 'A Case of the Borrowed Tuxedo'.

But fun can be had, especially when live on radio in the US, 'Hill/Wiltschinsky - Pump It or Dump it'.

And you know you've been too New York frequently when this happens!

Occasionally I would add a more technical post such as, 'See the Sound Waves and Improve your Scales', or, 'Music Practice Tips - Classical Guitar'.

Of course many people want to know about being the 'wife' of a musician, which prompted this series of posts: 'The Wife of a Musician - Part 1 - The Music', and 'Part 2 - Travel', and for those really dedicated to the role of the wife of a musician you can find a few more links here.

But sometimes the blog posts just reflect what is happening at the time...how could I resist this one, 'Cabo San Lucas, Hard Rock Cafe and the Tale of an Iguana', or 'Manuel de Falla's, 'Miller's Dance', and the Solar System', or this one, 'Django Reinhardt, Stephane Grappelli and the Revolving Stage'.

No blog discussing the guitar would be complete without mentioning, 'Guitarists and Their B***** Nails'...

Finally, a few posts that have been particularly popular over the years, 'Sex, Drugs and Classical Music', 'Alicia de Larrocha, the Ritual Fire Dance and a Maths Exam' and 'Inspire Young Minds with Music'.

However, these are just a handful of the available posts, there are several hundred more, all of which can be found through the archives.

Many thanks to all those who have supported 'Life of a Musician' over the last 5 years and I hope you will continue to do so for many more to come.
Posted by Anna at Monday, July 25, 2011 No comments:

'The Arpeggio' from 'The Guitar Gymnasium'

Robin is frequently asked how he maintains speed, accuracy and fluency for prolonged periods whilst playing the guitar.
Although this may not be what aspiring performers want to hear, one of the answers lies in, 'The Arpeggio'.
The Arpeggio is a basic technique which is encountered in nearly every piece and is an excellent and essential technical exercise.

Even after more than 40 + years as a performer Robin will still practise arpeggios on a regular basis.

Chapter 1 of Robin Hill's, 'The Guitar Gymnasium' focuses solely on the arpeggio and contains 18 pages of explanations, advice, quotes and original exercises.

Today I have decided to show you the first two pages as an example of the approach Robin uses. 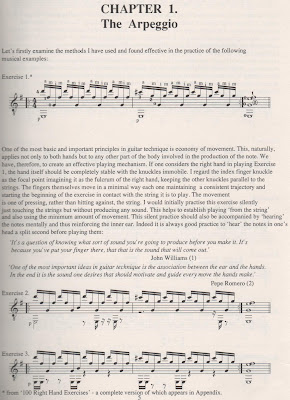 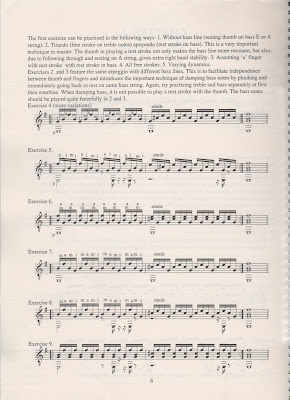 As Robin says later in the chapter, 'These exercises should be taken at a slow (60bpm) tempo initially gradually increasing the tempo. Practise with a metronome is recommended (but not all the time). The exercises should be played with fluency and technical command, accuracy is paramount.' 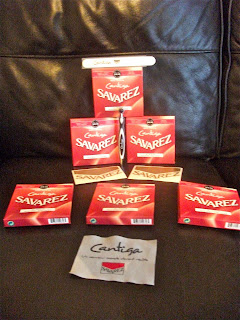 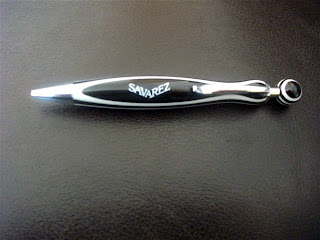 'Performance and Practice' from 'The Guitar Gymnasium'