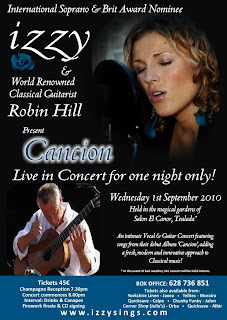 As regular readers will know Robin recently collaborated with the soprano Izzy Cooper to record their debut album together, 'Cancion'.
This has been an exciting and interesting project, and one that gives a new and refreshing look at the unique blend of the voice and guitar.

The official launch will be on Wednesday 1st September 2010, held in the beautiful gardens of 'Salon El Canor, Teulada, Spain'.
After a champagne reception, the concert begins at 8pm, there will be drinks and canapes available during the interval and the evening culminates in a firework finale.

For those lucky enough to attend there will be an opportunity to purchase the CD a few weeks before it is available for digital distribution, plus, a signing session has been arranged!

So far tickets have been brought from the UK, Sweden, Belgium and of course Spain itself.
For details, see the poster, or contact Izzy Cooper at www.izzysings.com

What a perfect way to end the summer with a few days away in the sunshine of Spain....

The first of many interviews have already taken place, this one 'Back in the Groove', by Jack Troughton

More will follow and once Robin arrives in Spain he will have a very busy schedule!

For those interested in the word cancion, it is the Spanish word for 'song' and is not only the album title but also the name of one track which was composed by Robin and inspired by the haunting and lyrical aspects of Izzy's beautiful voice.

As I know my blog readers like a little extra inside information, I can tell you that whilst the music had been written a few months earlier, the lyrics were composed the night before recording, by Robin in his hotel room, literally on the back of a guitar string packet!
In fact, he sang it down the 'phone to me, making alterations as he went, and by breakfast the next day had the completed version that can be heard on the CD.

So if you want the chance to hear many track from 'Cancion' live in a one of performance, then book yourself on a flight and spend a few days in this beautiful part of Spain.
Posted by Anna at Sunday, August 08, 2010 2 comments: