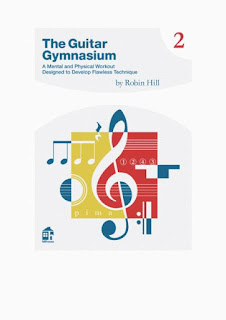 At last, The Guitar Gymnasium Volume 2 has arrived!

It's amazing to think that 'The Guitar Gymnasium' was written 20 years ago...this focused on performance and practice, alongside technique and has been very well received around the world. You can read about it here.

The Guitar Gymnasium Volume 2 continues to examine technique in detail with brand new exercises and insights from Robin. This draws on Robin's lifetime's experience of practice to achieve the high level required to perform in concert or record albums.

The Guitar Gymnasium Volume 2 is available for immediate download from Sheet Music Plus. 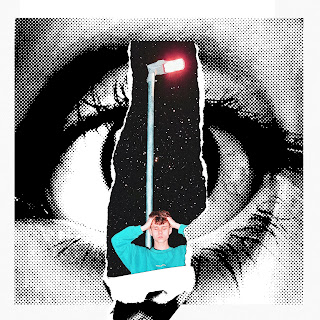 Felix Hill has released his 3rd single, 'Grow', you can listen on Spotify and it can be found on all digital platforms. To hear all his songs, 'Pale Moons', 'Streetlight Panorama' and 'Grow', go to his Spotify page.

They are all very different and 'Grow' reflects another of Felix's many musical influences. The topic, concerning the break up of a relationship, is a familiar one to most people.

From a very early age, Felix has listened to many diverse styles. I'm as likely to hear Frank Sinatra blasting from his room as I am the Arctic Monkeys, Declan McKenna or Rex Orange County.

I feel that 'Grow' highlights this very well. It has an 'old school' feel, which reflects his interest in Sinatra, Chet Baker, Wayne Newton and more recent artists, Michael Bublé and Bruno Major. There's no hiding place in the vocals for a song like this and I feel the depth of emotion Felix has achieved is way beyond his mere 17 years.

As with his other recordings, Felix plays all the instruments except the drums. These were recorded by the wonderful Maurice Cheetham.

Grow has already been performed live a number of times, with Felix's excellent drummer Ewan McDonough and is always very well received. Their next gig is on Saturday 14th March, Off The Square, Manchester, and tickets are available here. 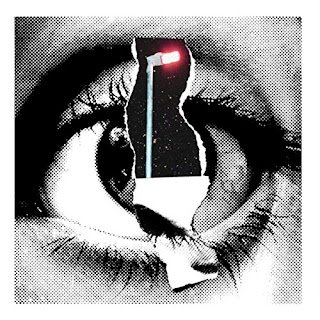 Felix has released his second single, 'Streetlight Panorama', a fast-paced indie-rock song, which reflects the current struggles that many people face, and tries to highlight the often-overlooked details of our society. The driving drums and the layering of instruments show the gradual change in our lives, with memorable and hard-hitting lyrics. The timing coincides with his gig at the Deaf Institute in Manchester, an established and well-respected venue.

Felix also plays all the instruments on the single, apart from the drums which were recorded by the fantastic musician Maurice Cheetham.


Streetlight Panorama is very different from Felix's first single, 'Pale Moons', and this highlights his diverse musical influences. Having grown up surrounded by music it is no surprise that he regularly listens to artists as varied as the Arctic Monkeys, Sam Fender, Rex Orange County, Chet Baker, The Beatles, Bruno Major, Joni Mitchell, David Bowie and many more.

You can find Streetlight Panorama on all the usual digital outlets, Spotify, Apple Music, Amazon etc. 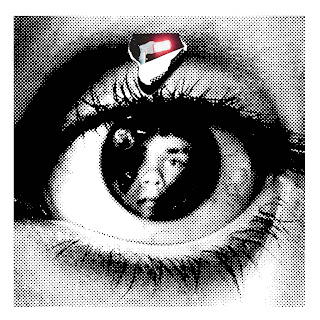 Robin, the Bat Guitar and the Cricket World Cup 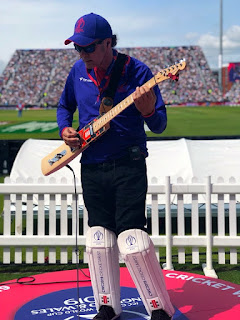 Robin has been very busy recently with several of his more unusual gigs...

For the last few weeks, he has been playing an electric cricket bat guitar at Old Trafford and Headingley as part of the ICC Cricket World Cup. His first match was a massive one between Pakistan and India to a worldwide audience of over a billion!
Standing on a podium at the pitchside, following a cue in his earpiece, he plays a famous guitar riff every time a wicket is taken. The riffs are an eclectic mix of Hendrix, Guns 'n' Roses, Thin Lizzy, AC/DC, Def Leppard, Clapton, etc., etc.

The spectators have been loving it as they can view proceedings on a giant screen. Over the tournament, word has spread and Robin has been getting many messages of encouragement on Facebook and also some requests! (which he has snuck in from time to time...) He has also been talking about it on BBC Radio and made the local newspapers!

One of the perks of the job has been an excellent view of all the matches he has performed at and he has thoroughly enjoyed the phenomenal cricket he has been able to observe at close quarters.

If you aren't able to attend but are watching on Sky, you'll still be able to hear him in the background!

It has been an honour to take on this role and he still has a couple left to do, so why not try and spot him...

Here's Robin practising one of the riffs, 'Thunderstruck' by AC/DC...

Robin has recorded a new podcast in which he talks about Claude Bolling's 'Concerto for Classic Guitar and Jazz Piano Trio'.

This fantastic concerto is in seven highly contrasting movements and Robin discusses each of them in turn with musical examples from the Robin Hill Quartet.

This is a virtuoso work which places great demands on the two soloists, guitar and piano which are expertly complimented by the double bass and drums.

Robin gave this work its UK Premiere, so it has always been a very important piece for him.
You can hear it here.


This piece has long been one of my favourites. I have been playing and performing it for many years and always find it optimistic and uplifting.
This particular performance was unplanned, I was actually being filmed with a band for a future project (watch this space...) when the director, Oliver Hill, (my eldest son!) insisted we film a solo piece. I'm delighted he did.
The guitar is actually a flamenco guitar made in 1963 by Manuel Reyes.


Robin Hill plays Prelude from Cello Suite No.1 by J.S.Bach from Robin Hill on Vimeo.