As is traditional at this time of year, I have decided to do a quick review, and highlight some of the most popular blog posts.

Despite global recession Robin has travelled to over 30 countries (I gave up counting in the end...) and performed to many thousands of people.
It is always a delight when Robin receives comments and feedback after a concert, and when someone goes to the trouble of seeking the artist out to express their enthusiasm, it is even more rewarding.

It hasn't all been good though.

We have been plagued by 'pirates' with well in excess of 10 000 illegal downloads, and those are the ones I know about.

Not unrelated, as major record companies try to find a way around these issues, was a particular low spot for me, as we had to pull out of recording Robin's concerto, 'Eternal Dances' with the fabulous London Symphony Orchestra due to funding problems related to the recession.
However, yesterday I was delighted to receive an email from a gentleman in Ireland, who had heard one movement played on RTE, and was so taken by it that he managed to contact me to express his enthusiasm.
I know that this piece will be an exceptional addition to the classical guitar concerto repertoire and will therefore pursue the project with renewed energy in 2010.

Looking back through some of the blog posts in 2009 there were a few that stood out.

Back in February we joined Reverbnation.
This post, 'The Stories Behind the Music - Robin Hill on Reverbnation' does exactly as it says. A little insight into each of the pieces available on the player.

In June we were delighted to discover that one of Robin's pieces, 'Dolor de Muelas' had been nominated for an award, 'JPF Music Awards 2009 - Nominee...Robin Hill!!'
Whilst the piece didn't go onto win, it was a massive achievement to reach this stage.

Also in June a surprise favourite post that came about from a simple question posed on Twitter, as to whether musicians like to eat before, or after, a concert.
I'm indebted to all those that replied, and would like you to know that this post continues to be read daily around the world! 'To Eat or Not to Eat - Before a Concert'.

Then in July a milestone was reached as we celebrated our 3rd Birthday. Quite an achievement in the blogging world, and one that I am rather proud of. 'Life of a Musician' 3rd Birthday'.

By far the most popular post of the entire blog, never mind the last three years, was written in October.
'Music Practice Tips - Classical Guitar' continues to be read worldwide on a daily basis.
The post itself is an extract from Robin's book, 'The Guitar Gymnasium', so all those who have found it interesting should perhaps order themselves a copy, as the post is only a fraction of information that has been tried and tested over a lengthy performing career.

But for now I would like to thank all my readers for continuing to follow the life of this particular musician and to wish you all a very happy and healthy 2010.
Posted by Anna at Thursday, December 31, 2009 No comments: 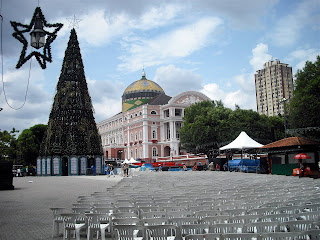 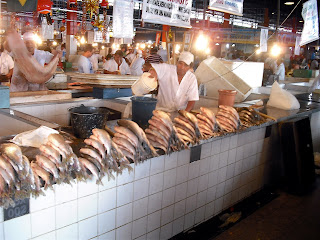 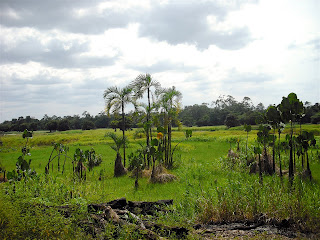 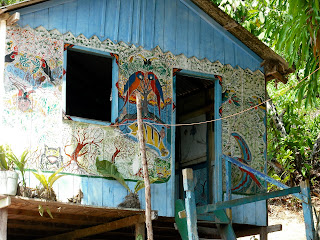 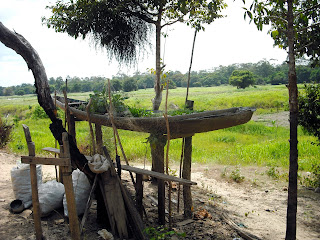 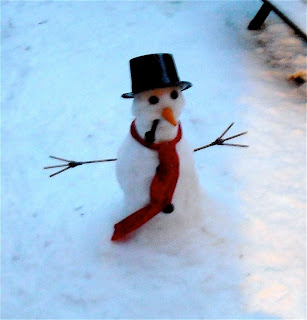 As Robin makes his way up the Amazon on Crystal Symphony, it became obvious that Christmas preparations were underway in Manaus, Brazil: 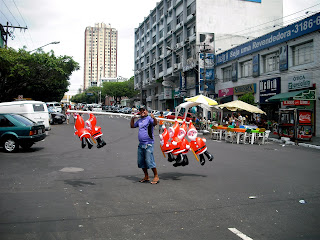 He has already visited some incredible places and I'm hoping for photographs soon.
However sending them is proving a problem just at the moment.
But regardless of the fantastic sights he is seeing Robin has two concerts to prepare for, so he is keeping busy.

Meanwhile I thought I would share this joke with you.

It was sent to me by our wonderful friend Paul Griffin.

So at this busy time of year, take a few minutes to sit back, relax and release the inner musician...

C, E-flat and G go into a bar. The bartender says, "sorry,
but we don't serve minors." So E-flat leaves, and C and G
have an open fifth between them. After a few drinks, the
fifth is diminished and G is out flat. F comes in and tries
to augment the situation, but is not sharp enough.

D comes in and heads for the bathroom saying, "Excuse me.
I'll just be a second." Then A comes in, but the bartender
is not convinced that this relative of C is not a minor.
Then the bartender notices B-flat hiding at the end of the
bar and says, "Get out! You're the seventh minor I've found
in this bar tonight."

E-Flat comes back the next night in a three-piece suit with
nicely shined shoes. The bartender says, "you're looking
sharp tonight. Come on in, this could be a major
development." Sure enough, E-flat soon takes off his suit
and everything else, and is au natural.

Eventually C sobers up and realizes in horror that he's
under a rest. C is brought to trial, found guilty of
contributing to the diminution of a minor, and is sentenced
to 10 years of D.S. without Coda at an upscale correctional
facility.