Those who follow this blog regularly will know that Jimi Hendrix has played a huge role in Robin's musical life.
But it wasn't just Hendrix, it was the whole 'Jimi Hendrix Experience', the meeting of three musicians who changed the face of music.
Jimi Hendrix, Noel Redding and Mitch Mitchell.

It's not just Robin though, most musicians I know have spent a lifetime listening to the music of Jimi Hendrix. Right across the range from classical, jazz, to rock.
There was something so exhilarating, exciting and original about their playing, interaction, and complete 'ease' with their instruments that seems to inspire all musicians. Nigel Kennedy, for example, has always been very vocal about his musical roots and love of Hendrix.

So it was with great sadness that we heard of the death of the last surviving band member, Mitch Mitchell.
Mitchell was a fabulous drummer and the interplay between him and Hendrix was legendary.
You can read an interesting and informative obituary in The Telegraph.

The sad news prompted a weekend of listening to various tracks and searching for a fitting YouTube video to show all the band members at their best.
But it didn't stop there.
Robin has spent some time practicing Rodrigo's, 'Concierto de Aranjuez', for a performance next year, and emerged from the music room as I was surfing the net.

Just to live up to his reputation of the 'Hendrix of the classical guitar', he proceeded to play the opening bars of the concierto with his guitar behind his head...
It wasn't until I pointed out that this may not be the best way to treat his valuable Rodriguez guitar, and that maybe he should try it with his Stratocaster instead, that he stopped. (I know, it's boring always being the sensible one...)

Anyway, the world is a poorer place with the loss of Mitch Mitchell.
Our hope is that finally, after many years, the trio have now been reunited, and are holding the best ever jam session somewhere....

But here on earth, we have to be content with archive footage.
There's so much to choose from it has been difficult.
We finally settled on a song called 'Killing Floor', originally by the band, 'Electric Flag', as it shows beautifully the energy and interaction on stage during a live performance.
As the video won't post to blog, you'll have to click the link to watch, but it's worth it... 'The Jimi Hendrix Experience - Killing Floor.'
Posted by Anna at Tuesday, November 18, 2008 4 comments:

Since my last post Robin has been busy.
He performed his second concert on the Queen Victoria and was very pleased with the result.
As I have said before, he doesn't often say that he is happy with a performance, so this must have been quite a concert.
He has had many lovely comments from members of the audience which always helps when dealing with time away from home.
But he is now at approximately 30 000 feet, flying from Istanbul to Manchester, and is expected home later today.

So whilst I prepare for his return, and tend to a sick son number one, you can read about a new piece of music composed by the Royal composer, Sir Peter Maxwell Davies.
The piece, 'Liber Pulsationis Fabulatoris', has been dedicated to another Sir, Sir Paul McCartney.
Maxwell Davies appears to have a sense of humour as the first three letters spell, 'Lib Pul Fab'.
To find out more, read this article by Mike Wade, in The Times.
Posted by Anna at Friday, November 14, 2008 No comments:

Now this is confusing as Robin is actually on the Queen Victoria.
But as he has performed many times on the QE2, and I have many QE2 fans who follow this blog, I couldn't let such a significant day pass without a mention.

I am referring to the preparations for the final journey of the QE2 as she leaves Southampton.
You can read an article by Caroline Gammell here.

The QE2 is very special and Robin has had many happy times on board.
I have written so many posts about her over the years, and you can see some of them by typing QE2 into 'search blog', but here are a selection.

'The QE2, the Giant Cat, and Plenty of Practice', 'Comedy on Cunard, Coffee and Clapping and YouTube', or maybe, 'Post Rodrigo's 'Adagio'.

There has been a minor problem though in the early hours of the morning.
Apparently the QE2 ran aground, but even this event was so gracefully done that most passengers were unaware of the problem!
You can read Kate Kelland's report here.

We wish her a safe final journey. Meanwhile, Robin and the Queen Victoria have arrived in Port Said, Egypt, and his second concert is tomorrow.
Posted by Anna at Tuesday, November 11, 2008 No comments:

Since my last post it has been a busy time.
Robin joined the Queen Victoria on Saturday in Valletta, Malta, and immediately started preparing for his concert on Sunday.
I'm pleased to report that it went very well and he now has a few days until the second, and last concert.

The timing has worked out perfectly for Robin as today the Queen Victoria arrived in Alexandria, Egypt, a place he hasn't been to before.
So he is allowing himself some time to look around.

Someone told him the Bazaar was one of the scariest places they had been, but also that it felt like you were walking onto the set of an Indiana Jones film! I am waiting with interest for some feedback.

Robin however is very excited at the prospect. He has spent the morning working on a concerto he is performing next year, (as always work comes first...) and will be walking the streets of Alexandria this afternoon.

It looks a fascinating place.
It is the second largest city in Egypt, and is often referred to as the 'Pearl of the Mediterranean', as it has an atmosphere more Mediterranean than Middle Eastern.
I'm sure there will plenty to do and see.
With such an interesting past, to read some examples try, the 'Lighthouse of Alexandria', one of the seven wonders of the ancient world, or the 'Library of Alexandria', the largest library of the ancient world, or even the 'Catacombs of Kom el Shoqafa', the ambiance must surely be incredible.

In fact I have often read that you should explore Alexandria at random and enjoy the atmosphere as much as the sights.
I just hope he doesn't get lost.
Posted by Anna at Monday, November 10, 2008 No comments:

Robin has arrived in Malta after an early start and is now settling into a rather nice hotel for the night.

So, whilst he prepares for his concerts later this week, I have other news for you.

If you live within travelling distance of Wilmslow, Cheshire, (UK) then here's a date for your diary.

Two weeks today, on Friday 21st November, Robin will be performing at a special event.
He's very excited about this as he gets to use the rather nice audio equipment belonging to Bang and Olufsen.

The performance starts at 7.45, and during the interval you will have the opportunity to look around the Wilmslow store.

Robin is a big fan of Bang & Olufsen and I frequently have to hide the catalogue from him when it arrives on our doormat.
I have spoken to the manager and banned him from selling any products to Robin whilst he's there on the 21st...

If you are interested in attending the concert, then contact the store directly on 01625 527666, but be quick as the event is ticket only, and there are a limited number of places available.
Posted by Anna at Friday, November 07, 2008 No comments:

The legendary soprano Yma Sumac, often called the 'Peruvian Songbird', has died at the age of 86.

When asked recently how she would like to be remembered, this is what she said:

"That I made good music and made happy, their hearts."

She certainly achieved her wish.
Tributes have been made around the world.
Her international success was based on her extreme vocal range, well over four octaves, and at her peak a staggering five!!

Despite a lack of formal training her skill has influenced many over the years.
The song 'Ataypura' featured in the Coen Brothers 1998 film, 'The Big Lebowski', and samples of her songs have been used by the Black Eyed Peas.
In fact, Yma herself appeared in many films over the years.

A good example of Yma Sumac can be seen in the YouTube video of the song, 'Gopher Mambo'.

We have had a very exciting weekend.
Many months ago son number two was promised a puppy.
He's too young to remember the whole 'puppy' experience and was desperate for his own small furry friend.
Having established that this wasn't just a passing phase we finally relented.
So, here she is, introducing: 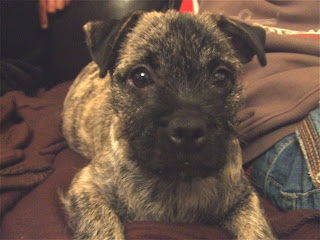 She is a delightful little girl, a cross between a Pug and a West Highland White, therefore known as a Pugland.
Having taken delivery of her on Saturday she has managed to make herself very much at home, and win over all the Hillhouse members, human and furry.

In fact as I type, at a rather unusual angle, she has fallen asleep on my knee.
Fortunately she has a big, confident personality, despite her size, as she has a lot of different noises to get used to.

So far, luckily for us, she is very happy with the sound of the guitar.
There was a momentary hesitation with the violin, but she has now got over that.
And she appears perfectly at ease with the harmonica and the tambourine, (yes, all played regularly here at Hillhouse.)
We haven't subjected her to the drums yet, much too loud for those little ears.

So watch this space.
Traditionally every pet we have ever introduced into our home has had a piece of music composed for them.
Pugwash Puganini will be no exception.
Expect something big.
Although small she is full of character, and her Dad's smitten...
Posted by Anna at Monday, November 03, 2008 1 comment: