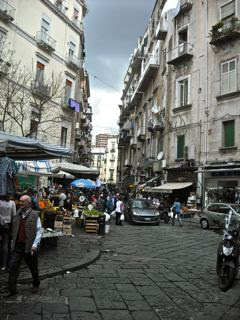 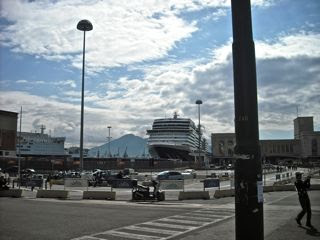 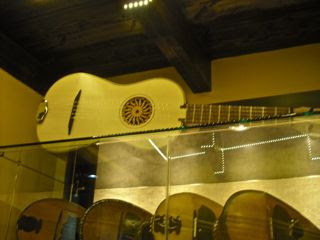 As always on his travels Robin somehow manages to find a music shop.
This one specialises in mandolins plus the rather unusual Italian guitar.
I can relax though as I have been assured that it has remained firmly on the top shelf.
Posted by Anna at Saturday, May 08, 2010 No comments:

From Brazil to Barcelona with a Classical Guitar

Since my last post a lot has been happening.
The life of this musician is certainly varied and thankfully very busy.
In the last month alone Robin has performed 5 concerts and shared his music with in excess of 2500 people. Not to mention travelling to Brazil, Spain and Portugal.
This is an incredible achievement.
The time away spent away from home can be difficult, but this is eased by the reaction to all the concerts performed.
Both audience and organisers have been equally positive and enthusiastic.

Returning to Brazil was a real treat for Robin. Although the journey there is long and exhausting, the rewards on arrival are incredible.
Lovely people and amazing scenery.
To wake up to this sort of view is really something special: 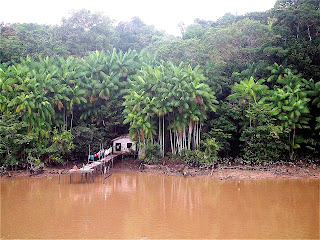 There's one village in particular that Robin always loves visiting, and in fact this was the second time he'd been there in just a few months.
The village is, 'Boca de Valeria', and the local people are keen to talk to any visitors and show them around their homes.
The children all get very excited and Robin has decided that on his next visit he will offer to play for them in their small church:

You can read more about Robin's previous trips to Brazil and see some lovely pictures, here, 'Arrival in The Amazon, Caruso and Fitzcarraldo' and here, 'Back to The Amazon'.

Robin managed to get home before the disruption of the volcano in Iceland and spent a whole 10 days with the family!

It wasn't without its difficulties though.
A lunchtime concert in Doncaster Museum had to be cancelled as Robin broke down on the way there.
He was devastated by this.
In the whole of his career he has never had to cancel a concert. (Even when extremely ill on a two week tour in Ireland some years ago he managed to complete every single performance. Although on the last concert he was unable to go on stage for an encore as he physically couldn't face the bright lights. The next morning we found out he had measles.....medical advice was to stay in a darkened room....)
However, a new date has been found for the concert in Doncaster so put it in your diaries now: 9th March 2011.

After another week away, travelling to Spain and Portugal, and 3 further concerts Robin returned home for a quick visit.
In just two days he managed to catch up with all the family news and start memorising some new pieces.
This is an essential process when performing so frequently.
New pieces have to be learnt and rehearsed until ready for public performance.

Now Robin is off again.
He is back in Spain and preparing for his concert in 2 days time.
There are so many exciting things being planned at the moment that I sometimes wonder when I will find the dates to fit them in.
However I usually manage it. Somehow.
So keep checking in to find out what happens next...
Posted by Anna at Tuesday, May 04, 2010 1 comment: