This is Robin's last full day at sea as the QM2 is heading towards New York.
It is also the day of his second, and last, classical guitar concert. The performance is this afternoon, but, due to the now quite significant time difference, it will be tomorrow before I report back.
Robin was up early to get on with his practise, and if you look closely, you will see he is using the 'sock' technique. 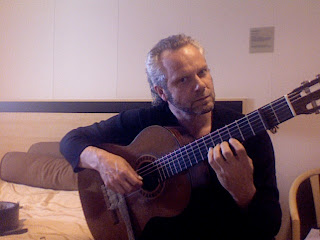 Yes, it is simply that, a sock stuffed under the strings to dampen the sound and prevent waking your neighbours!

He did take some time out again last night to watch a film.
Not one to stray too far from music, he watched the film,'Bride of the Wind', which, although it has been on release since 2001, appears to have passed us by.
It is a film about Alma Mahler, her marriage to Gustav Mahler, and her many passionate affairs with some of the most talented artists of her time.

Robin thoroughly enjoyed the film, and, we hope to be able to watch it together soon.
Posted by Anna at Thursday, October 18, 2007