The other day we put a track on the blog, 'Fast Forward', which has proved very popular.
We decided to put another track on today, of Robin, and his band 'Hooper'.
This one is called, 'Wizard of Waukesha', named after the 'Wizard' himself, Les Paul.

Les Paul was inspired to take up the harmonica, aged 8, by a Waukesha ditchdigger, but Les Paul's interest was the electric guitar. He was hugely influenced by Django Reinhardt, and went on to make a name for himself as a brilliant jazz guitarist.
Such was his love of the instrument, that in 1948, when involved in a horrific car accident, he insisted that his arm be 'set' in a right angle position, suitable for playing the guitar! (Amputation was the other option, which, thankfully wasn't undertaken.)

Les Paul was a pioneer of the music industry, experimenting with multi track recording, and inventing the solid-body electric guitar, Les Paul.

You can clearly see, in this picture, Robin playing his Les Paul guitar. 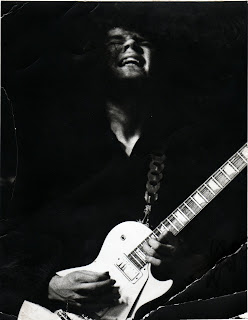 It was with great delight, that on one of Robin's recent visits to New York, he saw a poster, in the window of a Manhattan jazz club, advertising that Les Paul regularly performed there. It's amazing to think that at the age of 92, he is still out there, entertaining audiences.
Unfortunately Robin was due to fly home that day and therefore didn't get to see him.
But, Les Paul, was the inspiration behind this piece of music.
Listen out for one of Robin's specialities, the super fast, pizzicato, rhythm playing.
So sit back and enjoy Hooper playing, 'Wizard of Waukesha'.
For now you can hear it from the player in the sidebar.
Posted by Anna at Tuesday, October 23, 2007