An Ornithological Day in Acapulco

The Queen Victoria was in Acapulco yesterday.
As Robin has completed his concerts, he was been able to have a good look round, and liked it very much.
There's a huge sweeping bay, and houses dotted all over the hillside, which he anticipated would look spectacular after dark.

First though, a trip to town turned into rather an ornithological day.
First there was his new friend a parrot: 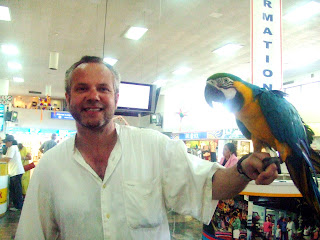 Apparently he was very heavy but had, 'beautiful plumage'.

Then there were some pelicans having a rest on a small fishing boat: 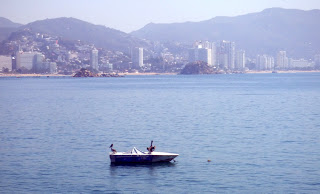 Even the taxi rank looks interesting, made up entirely of VW Beetles: 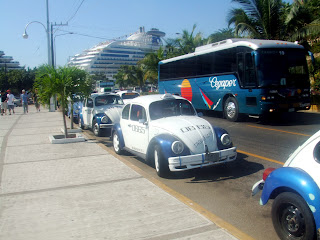 So, whilst Robin had 'Fun in Acapulco', I took our two children to the nearest town, so they could spend their Christmas/Birthday money, that was burning a hole in their pockets. We had a good day too!
Posted by Anna at Sunday, January 27, 2008

Lovely plumage on that parrot... though it's not quite a Norwegian Blue

Glad to see you got the joke!