Standing Ovation on the QM2 to 'Memory Almost Full' - McCartney

Well, I can report, that the guitar concert was a resounding success.
The venue on board the QM2 was full, both upstairs and down, and Robin received a standing ovation which was very much appreciated. Applause alone rewards any artist for all the hard work they put in, not just on the day, but for years prior to ever reaching the concert platform. To get a standing ovation, really encourages a performer, as audiences don't tend to give them away easily.

Unknown to Robin, one member of the audience was undertaking his own form of art work, whilst Robin was on stage. He later sought Robin out and presented him with this drawing he had made whilst Robin was performing. He was delighted.
As you can see from the photo, he has a post concert look about him! 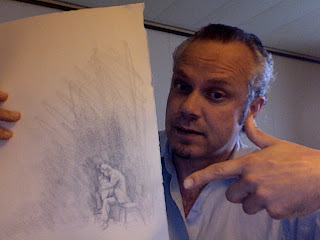 During the concert Robin was introducing 'Xodo Da Baiana' and happened to say that he had been unable to find suitable translations for some of the Portuguese titles, and if anyone could help would they please contact him.
A very nice man from New York City came forward at the end of the concert and offered his services as a translator - they are meeting up later today.

Life at sea runs slightly differently to land and the concert was at the unusual time of 2.30.
So what does a musician do to unwind post concert when it's only mid-afternoon.
Well, this one went back to his room and read a couple of chapters of 'Wuthering Heights', prompted by his recent visit to the Bronte household.
He did go out later in the evening and watched the RADA show, which he found very amusing and very well acted. Well, what do you expect, it was RADA.

Meanwhile in the UK, Sir Paul McCartney has given a 'secret' gig at the 'Electric Ballroom' in Camden. The secret didn't last long though and the 1000 invited guests and media had to run the gauntlet of photographers.
This was all in aid of promoting his 21st solo album, 'Memory Almost Full', sold exclusively through Starbucks coffee house.
To read a full review of this "utterly compelling concert" read Robert Sandall's report, 'McCartney looks back to where he once belonged'.
I'm off out to get a coffee and a CD....
Posted by Anna at Friday, June 08, 2007