Intermittent contact has been made with Robin, mid Atlantic, and the weather yesterday, wasn't looking too sunny. This is the QM2 as it noses its way through the waves. 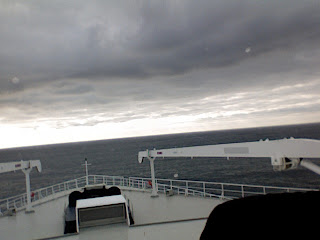 As Robin is shut away in his room practicing most of the time I don't think he is too concerned.
Although his guitar has caused a problem for the first time at sea, and surprisingly, from another musician.
Mid rehearsal he had a 'phone call from the neighbouring room, and the occupant said that he was a pianist trying to compose, and he couldn't concentrate because of the sound of the guitar!!
Robin has now stuffed a pair of socks under the strings and is continuing his muffled practice.

Today would also have been the 104th birthday of the Armenian composer Aram Khachaturian. He was born in Tbilisi on the 6th June 1903 and died in Moscow on the 1st May 1978.
The son of a book-binder, he showed an early love of music, but, it wasn't until he moved to Moscow in 1921 that his musical talent was discovered.
He joined the Gnesin Music Academy in 1922 and began to study the cello. His creative gifts developed rapidly and by 1937 he was an established composer, with works being published as early as 1926. ('Tants' for violin and piano, and 'Poema' for piano).
His early works include the Trio for clarinet, violin and piano (1932), Symphony No.1 (1935), and the Piano Concerto (1936) which brought him international acclaim.

In the 1940's came the ballet 'Gayane', which contains the popular 'Sabre Dance', the Second Symphony, and the Cello Concerto, amongst others.
He later wrote film scores, conducted and was a composition teacher. (Thanks to 'The New Grove: Dictionary of Music and Musicians' for specific details.)

For one of his most famous works, the ballet, 'Spartak', he received many awards, and it is said that during one performance he left suddenly in the middle of the first act.
He was later found nearby and said, "If I had stayed, I would have caused a terrible scandal."
When asked why, as the production and the orchestra were both excellent, he replied, "They have cut 4 bars of my music."
Although the audience hadn't noticed it had exasperated the composer.

He did have a sense of humour and was known as an animal lover. In fact, whilst on a trip to Germany, he was given the gift of a Poodle whom he named Lado. (the musical notes, La and Do)
To read more about Aram Khachaturian, visit the 'Virtual Museum', where you can listen to Sabre Dance on the opening page.
Incidentally, Robin once recorded Sabre Dance on electric guitar, it proved very popular and was incredibly high energy!
Posted by Anna at Wednesday, June 06, 2007