This is Robin, ready with his guitar, about to leave his room and go on stage for the second, and last, concert of this trip on the QM2. 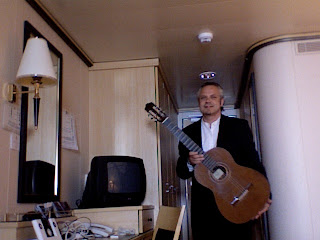 This is Robin just after the performance: 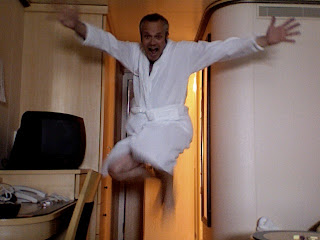 There appears to be a certain amount of relief, and release of tension, in this image.
I can now report that the second concert was as successful as the first. The theatre was full, balconies included, and once again, he received a standing ovation.

Robin was particularly pleased, as he had decided to play two pieces for the first time in concert, which is always a nerve wracking experience. Not only that, but he told the audience during the introductions, which must have cranked up the tension even further.
You can just imagine them waiting for a mistake.
However, there weren't any, the audience loved the pieces, and, in fact, he was told later by one couple, that they were privileged to hear him play.
That's very nice.
The two new pieces were, 'Tango en skai' by Roland Dyens, and 'Un Dia de Noviembre' by Brouwer.

Later that evening, Robin had been invited out to dinner, and by huge coincidence, found himself sitting next to a gentlemen that went to the same school, was one year above Robin, but they had many mutual friends, and knew all the same teachers.
It really is a small world after all.

One thing Robin has enjoyed on this trip, is what he calls, 'sleep utopia'.
You gain one extra hour in bed every day that you are on board.
What he fails to have remembered, is that he's going to lose all those hours, in one huge serotonin rush, tonight, when he flies home.
That, coupled with two small children very keen to see him, and waking early due to the light mornings, could all feel a very long way off soon.

Meanwhile, David Juritz has arrived in France and has a pretty hectic busking schedule around Paris. If you go to 'Round the World and Bach' you will see his itinerary for the day, and also a link to his blog.
Posted by Anna at Sunday, June 10, 2007