The Many and Varied Uses of Savarez Guitar Strings...

After the technical blog yesterday, about the tremelo technique, I thought we would have a light hearted approach today. Don't worry though, there a plenty of exciting things coming up, including some video footage.

As you can imagine, we get through a large amount of guitar strings, in this house.
Robin uses Savarez, Corum, strings, and as I've said before, regularly changes them.
The bass strings will certainly be changed before every concert, and in between as well. The treble strings, less frequently, but they never stay on longer than a couple of weeks or so.
But what happens to them......
Where do they all go.....

Well, on the whole, you can open any drawer in our house, and a curling mass of strings spill out, and try to escape.
They are unceremoniously returned, and the drawer shut quickly, to prevent any further spillage.

They are also frequently found wound around my vacuum cleaner, with me beside it, patiently 'unwinding'...

But there is an upside.

Robin is not known for his DIY skills, (not a good hobby for someone who relies on his hands to make a living), but he does have to occasionally 'fix' items around the house.
This ALWAYS involves an old guitar string.

The most useful attempt was on our toilet.
For more than 10 years a 'G' string allowed the smooth flushing system to work by holding the ballcock to the lever. It only had to be changed once in that time, and we were quite sad when we had a new bathroom fitted, and returned to a more conventional method of plumbing.

Other uses have been, threading through the locks of a suitcase broken in transit, holding down the bonnet of a car, tying on the bumper of a car, (different cars and only temporary repairs...), attaching bird feeders around the garden and very handy for travellers, to attach to plugs in hotels when the chain has broken.

One of the most ingenious uses was to retrieve some car keys, from the ignition of our locked vechicle, with the aid of coat hangers and a sort of 'noose system'.

But one of the most satisfying, was the repair of these glasses. 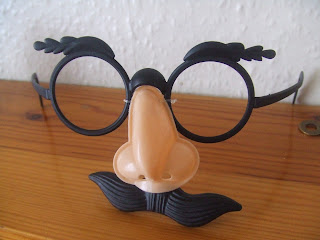 Son number two likes to transmogrify into a character, he refers to as 'Mr.Snug', whilst wearing these glasses.
He was therefore devastated to find the 'nose' had fallen off. Not to worry, 'Savarez' saved the day.

Ohh, they are also excellent play things for cats. Our cat Ramsbottom spends many hours chasing them around the house before they get relocated to a drawer, toilet, car, glasses etc.
But don't forget, this is only once they have played many thousands of notes....
Posted by Anna at Wednesday, June 20, 2007