A photo has arrived from Robin's trip into Phuket. Not the clearest of images, but, all I have at the moment.
Apparently the dog lying in the road is sleeping in the heat, and not, a casualty of one of the great cars! 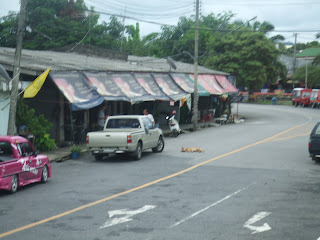 A good time ashore was had by all, although nobody has seen the pianist, he was last spotted having an elephant ride. I hope he managed to make it back in time and isn't stuck on a rampaging elephant through Thailand.

'Then the whining schoolboy, with his satchel and shining morning face, creeping like a snail unwillingly to school.'

Not the case for us this morning. Son number one had the shining face, and was rather snail like, but only because he was struggling to school carrying a huge rucksack as he heads off for cub camp!
The only whining was from me as I had to pack hat and gloves alongside sun cream and sunglasses as the weather is rather changeable!
Good job I'm an experienced packer...
Posted by Anna at Friday, May 04, 2007