As if by Magic - The Bay of Bengal

As Robin left Myanmar he sent two further pictures.
The first is of this rather beautiful lady and her child. She explained that the face paint was made from wood pulp and worn mainly by the women and children. It's function is not only decorative, but also, to help protect from the vicious sun. 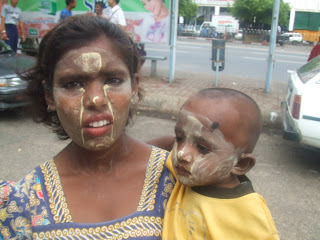 Secondly, an image of a lovely flower: 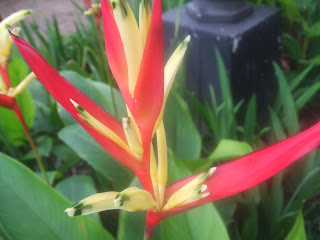 But now, Crystal Symphony is back at sea, crossing the Bay of Bengal on its way to India.
Robin left home so long ago that his return flight tickets weren't yet available.
I had to pass on a message that I found rather amusing.
When he arrived on board Symphony he had to find the magician, who was bringing out Robin's flight details and tickets, and as if by magic, he would be able to return home.
As it turned out, the magician, Brett, found him, and they immediately got on very well. They have enjoyed many evenings discussing music and found they have very similar tastes.
Robin has also been amazed by some late night, private viewing, of some spectacular card tricks.
His guitar practice will be stepping up a gear now as his second concert is on Thursday.
Posted by Anna at Tuesday, May 08, 2007