From A Day in New York to Heavy Weather to Rostropovich

Robin was lucky enough to have some time in New York yesterday. This was a rare treat for him as usually he is just passing through. He didn't have a full day, as getting through security took longer than anticipated, and he had to be back on board the QE2 by 4 pm. So, unfortunately, didn't manage to get to The Cloisters, as recommended by Paul, in New Jersey, and Ted, in New York. Many thanks for the directions though!

One thing he did need to do was to get some new strings for the next stage of his trip.
He found himself a luthiers in Manhattan and stepped inside, the first thing he saw was a copy of his very own book, 'The Guitar Gymnasium.' He was quite delighted and it reminded him of seeing a Hill/Wiltschinsky album in Tower Records a few years ago.

After a chat with the owner, Robin purchased some strings, along with another footstool, and this rather beautiful capo. 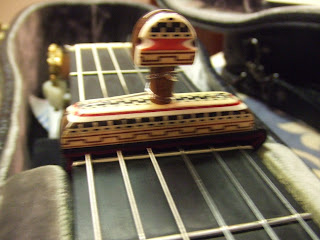 As he left the shop and walked down the road he came across the legendary Birdland Club. This is the famous New York jazz club that so influenced the band Weather Report that they named their famous song 'Birdland' after it.
This has always been rather a special track for us. In the early days we would listen to it very loud, late at night, often with musician friends, and just enjoy.
Now, well, usually son number one tells us to turn the music down, he's trying to sleep...


However, we should also take a moment to remember Mstislav Rostropovich the outstanding cellist, conductor and pianist who died yesterday. Obituary provided by The Daily Telegraph.
Posted by Anna at Saturday, April 28, 2007