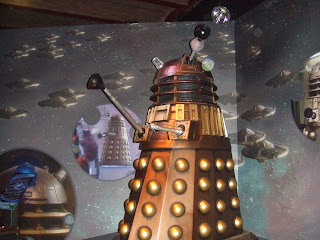 Robin has taken time out from guitar practice today for a trip to the Manchester Museum of Science and Industry with son number one, as they are currently showing Britain's biggest Doctor Who exhibition.
Doctor Who has a massive fan base, both old and young, but the reason I'm writing about it today is the music associated with it.
Some months ago we downloaded the album, Dr Who Theme (TV version), by Murray Gold.
It has proved hugely popular with both children and their friends.
The new arrangement of the Doctor Who theme, which was originally composed by Ron Grainer, is exciting and beautifully done.
In fact there are a total of 31 tracks, all depicting various characters and scenarios of the series.
Any self respecting 10 year old is able to identify the episode by the music.
This brings me to my point.
Many children don't have access to orchestral music, yet, most do have access to a television.
Gold has introduced an entire generation to the joys of the orchestra, whether the children realise it on a conscious level or only in a sub-conscious way.
From the haunting vocals in, 'The Doctor's Theme', choirs in, 'The Daleks', or the scary and dramatic, 'The Cyberman', (a personal favourite in our house).
This can only be a good thing. The arrangements are superbly done, subtle, and effective.
So if there are any reluctant classical music listeners, of any age really, who happen to be Doctor Who fans, then this is an excellent introduction. 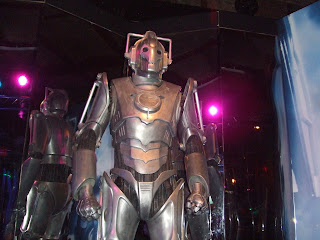 Email ThisBlogThis!Share to TwitterShare to FacebookShare to Pinterest
Labels: Doctor Who, Manchester Museum of Science and Industry, Murray Gold

Today (Weds April 18) NPR (National Public Radio) here in the US had a facinating story on WILLIAM GRANT STILL, a classical composer. In it his granddaughter talks of how he always dressed up when he was working, the care he took of his nails and the difficulties of writing orchestral music down. A wonderful piece that you can hear here: http://thestory.org/