I have previously written about Agustin Barrios, the Paraguayan guitarist and composer, but today I found this picture. 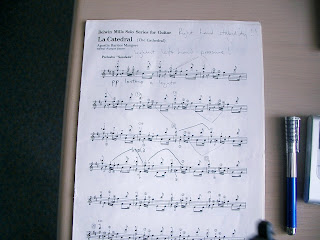 It is 'La Catedral', (The Cathedral), and as you can see from all the markings, Robin was working on it at the time.
The piece was allegedly inspired by a visit Barrios made to the main Cathedral in Montevideo. While walking past the building he heard the music of J.S.Bach being performed on the cathedral organ. This spiritual and musical experience later provided the basis for the original 1st movement (this later became the second movement as he added a much later composed introduction).
The original second movement, still obviously inspired by the music of Bach, was, with it's moto perpetuo semiquavers, an impression of the bustling streets outside the cathedral and the temporal world.

Robin was lucky enough to be in Montevideo whilst working on this piece, and derived a great deal of inspiration from visiting the very cathedral. Robin tells me that he always now sees the interior of the cathedral in his mind's eye when he performs this work.
This picture is from the inside. 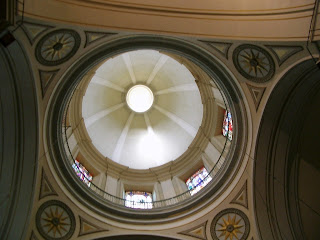 Just as a little extra snippet of information, Barrios is thought to be the first classical guitarist to have made gramophone records, in 1910, and to have played a complete Bach Suite, (Lute Suite No.1).
Posted by Anna at Wednesday, April 18, 2007