The QE2, Concerts, and a Stowaway

Robin has settled in on board the QE2, and is currently cruising the Pacific.
He has met up with a few familiar faces amongst the staff and crew, with one member being particularly pleased to see him, as he loves the guitar.
When having a break from his duties, he can often be found sitting in on Robin's rehearsals.
They've become quite good friends over a number of trips.

I also know that a number of guests on board have seen Robin in concert before, and are looking forward to the forthcoming series.
I know this because they got in touch with me before he left, and requested the Mozart Variations!
I passed the message on, and Robin has agreed to perform them, so hopefully they will be enjoyed by all.

The first concert isn't until Friday, but I have been sent photographic evidence that guitar practice and rehearsals are already well under way. 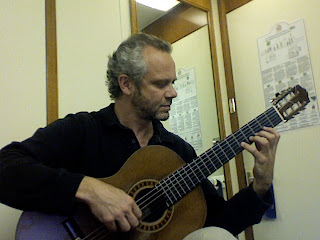 However, there appears to be a stowaway on board.
Son number two requested that his 'friend' went along, and his antics so far have been causing quite some mirth here at home. 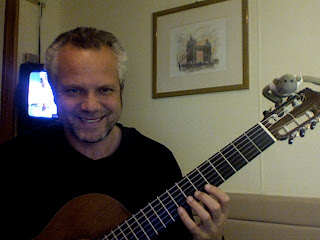 Not the easiest of positions to maintain whilst practising your right and left hand exercises...
Posted by Anna at Tuesday, April 01, 2008