The concert last night went very well, and Robin has been receiving very nice comments all day for members of the audience, from as far afield as Perth, Australia, and Huddersfield, England.
It makes all those hours of practice worth it.
If you are on board the QE2, and have been waiting for the Mozart Variations, then I believe they are in the next concert, so you will have to wait a few more days.
There is a rumour, that Robin has been asked by another artist, to perform one piece in her concert.
I'll confirm this, as and when, it has been finalized.

Meanwhile, the sun is shining on the QE2, as she travels through the Panama Canal: 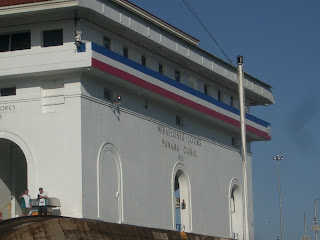 I'm not sure if it's the third or fourth time that Robin as been there this year, but never the less, I'm sure he will be enjoying it.
Sometimes you are issued with a certificate to prove you have been.
I'll have to start thinking of redecorating with them, if he continues to return so frequently.
I'm sure he'll be allowing himself a little time to relax today though, and will probably do some crocodile spotting up on deck.
A well earned rest.
Posted by Anna at Saturday, April 05, 2008