A Sitar is Born

And then there's the real sitar... 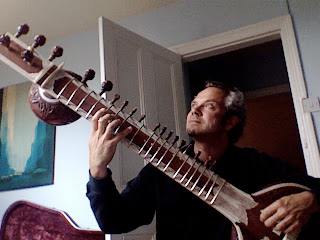 This is a fantastic and beautiful instrument which requires a lifetime of work. The whole technique is very different to the classical guitar but more similar to the electric guitar.
Traditionally the player sits on the floor, with legs crossed, but, as Robin finds it difficult to stay in this position for long, he has devised his own seating arrangement.
It seems to work for him and he is able to get some very nice sounds.
The strings are plucked with a 'mizrab' which fits over the finger, (George Harrison once said that it felt like a 'weasel holding onto the end of your finger'!)
I've tried one and it is a very good description....
However, this also gives Robin the opportunity to rest his nails, whilst still making music.
Consequently yet another project is underway using the sitar. 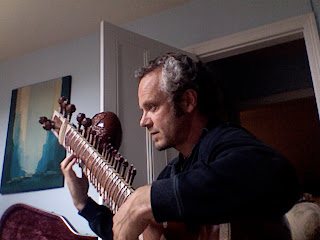 Robin's sitar has two 'toomba' which are made from gourds and act as a form of amplification.
It was certainly a rather unusual shaped parcel when it was delivered!
Posted by Anna at Saturday, August 18, 2007