A much happier man!
The second and last guitar concert on the QM2 went very well. 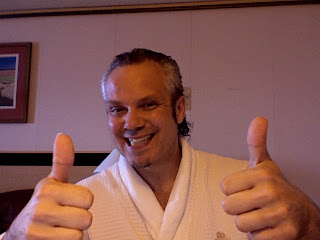 Despite feeling like he had someones toenails glued to two finger ends the concert was a success and the audience enjoyed it.
Robin had a lot of very positive feedback which is always nice.
He decided to relax back in his room afterwards by practicing the Bach Prelude from Lute Suite No.4!!
I suspect he also went out later for a meal and a few well deserved drinks...

Meanwhile here in the UK, Nic Fleming has been reporting that, 'Beethoven can help crops grow more quickly.'
It can in fact be classical music in general. I have a strong suspicion that the same applies to children.
You wouldn't believe the number of shoes I have just had to buy.
I think I'm going to have to get Robin to do 'silent practise' on his return in an attempt to slow down their growth rate...
Posted by Anna at Thursday, August 30, 2007