As Robin has now finished his work on board ship he can allow himself some time to relax.
Unfortunately the weather has taken a decidedly misty turn. 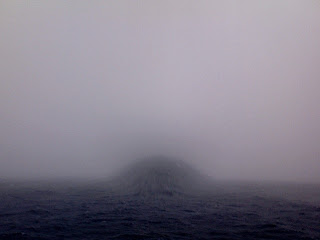 What is that in the middle of the picture?
Is it the Mozambique Channel equivalent to the Loch Ness Monster?

There has been plenty of positive feedback from various members of the audience which is always nice. One lady has asked if Robin has recorded 'La Paloma'. He was able to reply that it is soon to be recorded on the next CD.
La Paloma, which means 'The Dove', was composed by Sebastien Iradier who also composed the famous Habanera in Bizet's 'Carmen'. Bizet thought it was a folk melody but later realised his mistake and credited Iradier with the theme.
I'm sure Robin will be making good use of the time practicing La Paloma, and many other pieces, as he has a busy time coming up.
Don't forget the 18/19/20th March at the ExCel London, international food and drink event.
You'll need to look out for the Brazilian Springs Europe LLP stand. More soon.
Posted by Anna at Thursday, March 08, 2007