As you can see from this photo the sea remains rather rough although Robin said it is much calmer than it was... 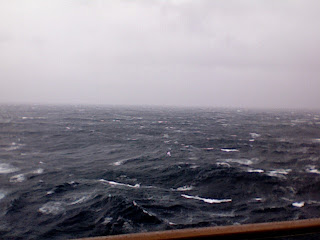 It's still nothing compared to one of the early trips Robin made in 2005. He was en route from Honolulu to Japan when they encountered some severe weather. The 40 foot waves meant long periods of time confined to his cabin. So he wrote this poem.

Is not quite where I want to be,

Cocooned inside the luxury liner,

I affect the pose of discerning diner,

The tiger sea - wrong side of sane,

Spits angry foam against the pane,

In witnessing this savage sight,

They taunt the beast and sip their wine,

Complacent they just drink and dine,

The audacity of the parasite boat,

To ride the tiger's back and float,

At 14 knots towards Japan,

Is more than I can really stand,

Will we arrive safe in the bay?

Or will the wildcat claim it's prey?