Robin has arrived in Maputo, Mozambique, but seen little of it as today is concert day.
This morning he had a sound check, which was fine, then the rest of the day was spent in practice and rehearsal.
If you have ever wondered what a soloist looks like backstage, about an hour before his concert, well, it's something like this... 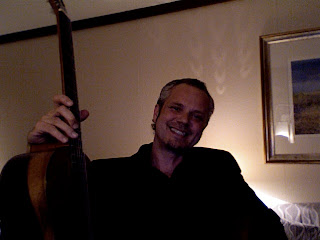 The concert itself is 40 minutes long, but done as two performances, and at the time of writing he has completed the first one.
Robin was pleased with how it had gone and amazed, once again, how the Rodriguez guitar just sings out in any situation.
Not time to relax yet though as he still has the second performance.
It's an awful long way to go to play what amounts to one evening recital!

UPDATE:
The second performance has now taken place and went very well. The cruise director said it was 'excellent'. That's great news and I think Robin is off to the bar for a well earned drink.
Posted by Anna at Wednesday, March 07, 2007