It's rather a strange experience for me, and for Robin, on this trip.
He is so used to travelling alone, and even has his usual room on Crystal Serenity, but this time is sharing it with son number one.

For me, it's odd to be receiving e mails from both of them, and pictures of my eldest, globetrotting around Europe!

To prove they are both there, here is the official Crystal photograph, of them beside Serenity: 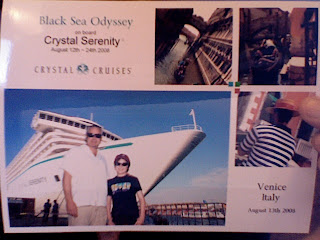 The first two days were spent in Venice, and here he is again, sporting a Crystal t-shirt given as a present from a previous trip: 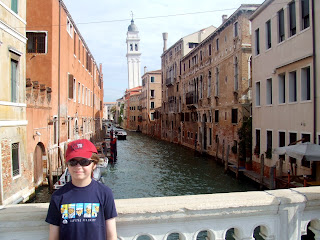 After a day at sea, they arrived in Katakolon, Greece, and spent a very pleasant time having a good look around.

But it isn't all fun.
Robin has also been working hard. Not only on the programme for his recital in a few days time, but also the new pieces and arrangements for the concerts in Spain, with Izzy Cooper, which are on the 27th and 28th of August.
You can see details of the Spanish concerts, including the official poster, here.

Meanwhile, here at Hillhouse it has also been busy.
I have been very pleased with a number of comments recently over on our MySpace page.
Go and have a look, and if you haven't been there for a while, you'll see there is now another track added, 'Footsteps of the Moai', taken from the new CD, 'Eyes That Talk To The Sky'.
Enjoy.
Posted by Anna at Friday, August 15, 2008