Odessa proved to be a fascinating place.
Situated in Southern Ukraine on the shores of the Black Sea, it has always been a strategic port.

It has quite a Mediterranean feel, partly due to the French and Italian influences on the architecture of some of the buildings.

An example is the Opera house, this rather elegant and spectacular building, with a small boy in front talking on the 'phone. (I'm really dreading this 'phone bill...) 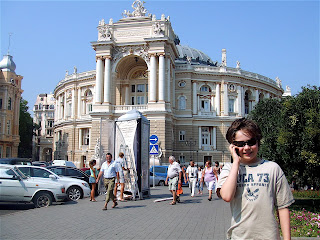 The cosmopolitan nature of Odessa is documented by the great Russian poet Alexander Pushkin, who lived in internal exile here for a year.

The continental flavour was continued, in a culinary sense, when son number one elected to eat snails for the first time.
Well, not exactly elect, it was actually more of a dare.
The prize must have been exceptional though, as he managed to consume the entire plate, and I hasten to add there were no ill effects.

As far as I'm concerned, snails should stay in the garden.
They hold no appeal to me at all.

I suspect that this was also the view of Doug Larson, judging by this quote I found sometime ago, and never thought I'd get the opportunity to use: (regular readers will remember another obscure quote I was delighted to include regarding Billy Connolly and a teas-cosy. You can read it here.)

"Never doubt the courage of the French. They are the ones who discovered snails are edible."
Posted by Anna at Wednesday, August 20, 2008