We have had a strange few days.
Robin and son left Crystal Serenity some time ago.
To prove Robin did actually do a concert whilst there, here's the poster: 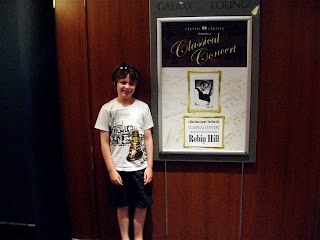 And this was taken during the sound check: 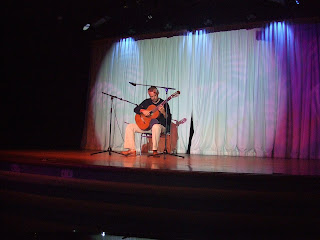 They then spent a few days in Spain preparing for the concert with Izzy Cooper. This is one of many rehearsals: 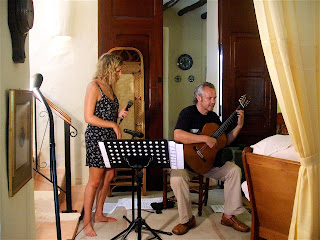 Apparently the concert was a huge success.
The beautiful setting was the perfect backdrop for a lovely concert, with a programme that included pieces by Leo Delibes, Manuel de Falla, Villa-Lobos, Leo Brouwer, Tarrega, Joaquin Rodrigo, Handel, Puccini and many more, and there was even a firework display at the end!
I'm hoping to get some pictures at some point, but I do know that the audience had a wonderful evening.
Despite some technical problems, which required Robin to tell a few jokes whilst the team sorted it out, all went extremely well.
So successful was the event that a recording will hopefully be made in the next few months.
It was 2am before the audience finally let the pair go, so it was rather a tired party that arrived to meet me at the airport.

Not that I minded.
I'd been up incredibly early myself in order to arrive in Spain at 11 am....
The reason for this madness??
Well, when it was arranged that son number one would accompany Robin on the Crystal trip we thought they would both be returning home at the end of it.

After all flights were booked and plans made, it became obvious that the only available date for the Robin and Izzy to perform, was the 28th August.
So, the Hill men were diverted to Spain.

Unfortunately, Robin then had to fly straight off to Malta...
So, on Friday, I flew over to Spain to collect my son, before he became an abandoned child.
We had checked out all possibilities for him to fly solo, but unbelievably it isn't possible between Alicante and Manchester before he is 12 years old!!

Actually, it did at least mean that I briefly met Izzy, and also had a whole 2 hours with my husband.
Obviously coffee and a sandwich in Alicante airport isn't the romantic of settings, but when he's away for a month anything is a bonus.

The time sadly flew by, and before we knew it there was a tearful farewell, as Robin boarded a plane to Malta.
Son and I then spent many hours sitting in the sun, outside the airport, catching up with news, before our flight home.

Now Robin has joined the Queen Victoria where he has two concerts over the next week, the first one today.