Do you remember a post I put up in March, 'Have You Seen This Lute?'

Well, I have an update for you.

Late last night I had an e mail from the owner of this delightful instrument.
His lute has been returned, and all thanks to the internet.
Apparently, the lute was put on eBay!!!
If you recall, the Lute Society had been informed of the loss, and thankfully a vigilant member came across it as they browsed.
They recognised it as the stolen lute and contacted the owner.
After a quick call to the police, it was recovered, along with many other stolen items.

This makes me think the thieves had no idea what they had, or, how to dispose of it.
Thankfully due to their ignorance and the keen eye of the lute society member, their little plan was foiled.

As I said at the end of the last post on this matter, "Lets see if the power of the internet can reunite this instrument with its rightful owner."
Well, the internet has proved itself as an extremely powerful tool on this occasion, as without it, this lute could have been lost forever. 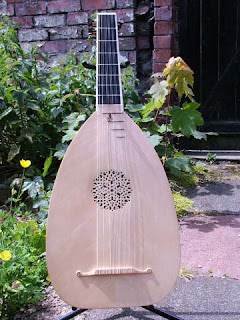