Mr. Creosote and a Pelican in Mykonos

Communication has been patchy, to say the least, over the last few days.
We have been able to talk briefly on the 'phone, but e mail has been particularly unreliable.
As you can imagine this is frustrating for all concerned.

However, Hill and son have been having an exciting time.
On Saturday they were in Mykonos, Greece, where they enjoyed a typical Greek island and made friends with one of the locals: 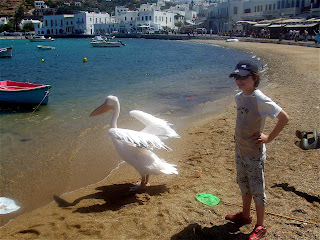 Sunday was spent cruising the Bosporus strait and the Black Sea whilst enjoying games of tennis and table tennis.
Son number one also mentioned that he was beginning to feel rather like 'Mr Creosote' after all the fine dining...

By Monday, today, they had reached Yalta, Ukraine, and enjoyed looking around this fascinating place.

Of course, between all this sightseeing, Robin has been preparing for his concert on Wednesday.
And whilst his Dad was rehearsing, well, like all good boys, son number one has been calling his Mum... 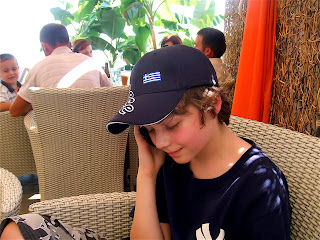