Whilst Robin spends the day cruising the Ionian Sea, I shall return to my alternative career as a travel writer, and show you the fabulous Island of Santorini: 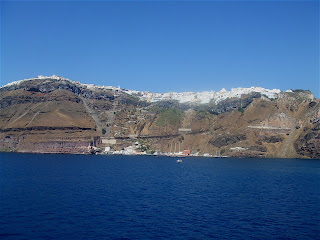 There are many churches to be found in the little roads and alleyways: 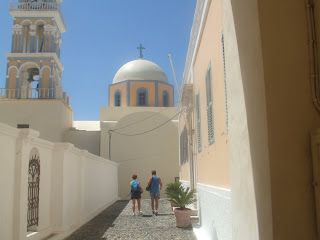 And it is certainly worth taking the time to go inside and have a look: 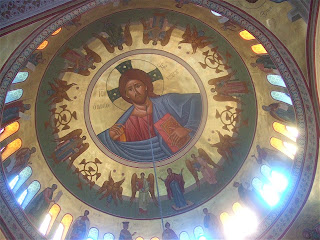 There are also numerous villages to explore: 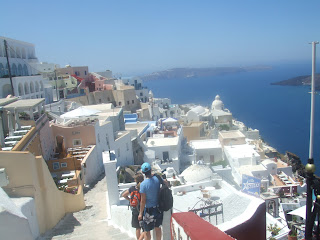 Robin took the opportunity to say hello to a shop keeper he has met on a previous visit, and after a chat, was directed to a spectacular place, with fabulous views. Most people go by donkey, allowing the beast to take the strain on the long and dusty route.
Not Robin.
He chose to make the 45 minute, arduous trek, in the searing sun, on foot.
He therefore arrived very hot and thirsty at his destination.
Luckily, there was a very welcome internet cafe, so he was able to enjoy a refreshing drink, and also to send me an e mail!

(I've just remembered that the last time Robin was in Santorini he came across a party of holiday makers, each on a donkey, and was asked, by the owner, to lead one donkey down the hillside. This he did, causing great confusion, when the same passengers later saw him up on stage performing a concert!)

However, it was worth the walk, as this was the view, which Robin admired along with a new found friend: 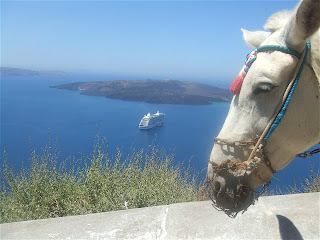 Yes, that is Crystal Serenity waiting in the bay below, and once back on board Robin was challenged to a game of tennis by Naki Ataman.
I think he slept well that night.
Posted by Anna at Monday, June 09, 2008