The Clairvoyant Rabbit and the Turkish Shoeshine Scandal.

Please excuse my absence for the last few days, and apologies to those of you that sent emails asking where I was. It's very nice to be appreciated!
To bring you up to date, Robin is still on the Queen Victoria, and had a very successful first concert.
It was well attended after the passengers had been exposed to a TV interview being played on repeat for the entire day.
They will be ale to watch a second interview tomorrow, as later today Robin will be back in the studio for further questioning.

Today he is in Civitavecchia, Italy, but it was whilst in Istanbul that he uncovered the Turkish shoeshine scandal.
The story actually begins back in August.
At that time, Robin was in Istanbul, and had our eldest son with him.
They set off to take a look around.
One of the first people they came across thrust a baby rabbit into the hands of son number one, and allowed him to admire it: 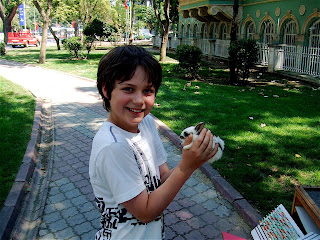 Like most young children he was very taken with the small furry creature and dutifully cuddled it.
The owner then produced a larger rabbit, (not out of a hat) which proceeded to select a piece of paper form a table which apparently would tell them their fortunes.
Unfortunately it was in such poor English that we are none the wiser.
But then the owner wanted to be paid.
As Robin and son only intended going for a walk they hadn't actually taken any money with them.
So after much arm waving and gesticulating they managed to hand back the rabbit and beat a hasty retreat.

Only to come across a young Turkish shoeshine boy.
As he walked by he dropped one of his brushes, and Robin dutifully picked it up and handed it back to him.
The grateful boy then thanked him profusely and cleaned his shoes - before asking for some money.
Once again the Hill men had to explain their lack of cash and made off as quickly as they could.
The fact that they had only been in Turkey for 10 minutes and already owed two people money, was the cause of quite some mirth on their return home.

However, Robin has since returned to Istanbul a number of times, and on this trip guess who he met?
As he walked through a park, there was the very same shoeshine boy, dropping the very same brush, right in front of him.

"You really are an old butterfingers with those brushes," Robin exclaimed as he went on his way...

As the old Turkish proverb says: