The Glory of Spain: 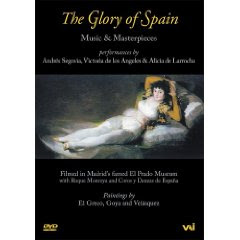 This is one of Robin's favourite DVDs and it has entertained him on many occasions whilst travelling.
But yesterday he found another use for it.
Son number one was anxious about a forthcoming test and Robin was trying to reassure him.
Then he remembered that on this DVD there's some footage of the pianist Alicia de Larrocha, performing Manuel de Falla's, 'Ritual Fire Dance.'

Robin played this too our eldest, who was suitably impressed by the incredibly dexterous, rhythmic and virtuosic performance.
He then asked what this had to do with his maths exam.
The answer was simple.
Alicia de Larrocha has been known to admit that prior to a concert she often is so scared that she hopes for an earthquake so the performance can't go ahead.
When watching her play with such confidence, this seems hard to imagine.
Strangely, it is often those with the most ability that have the most fear.
Their need to give the best possible performance, at all times, is a weighty responsibility.
The point being made, was of course, that son number one was only anxious because he cared.
He had done the work and wanted it to be reflected in his results.
We shall see...

But I did find the same performance on YouTube, unfortunately it won't post to the blog, but you can visit it here, so sit back and marvel.
Posted by Anna at Tuesday, October 14, 2008