We have had a particularly busy weekend preparing for Robin's trip and keeping up with new friends on MySpace.
Fans of Twitter will already know that we were up at 4.30 this morning, although I must confess I returned to bed, after waving the taxi off...

Robin has arrived in Rome, after a very brief stop in Munich, in which he had 1/2 hour to reach his connecting flight.
He made it, and is now making his way to Civitavecchia, where he will be joining 'Crystal Serenity'.
More of that as the week unfolds.

The new MySpace page is going well and I'm delighted with the response so far.
When setting up the page we talked at length about the profile picture we should use.
Should it be Robin alone, or, should I be shown, as I am obviously involved?

We decided to take a few pictures to see what we thought.
Those of you who have already visited the page, will have seen that we decided on a picture of the two of us.
However, there was another close contender. 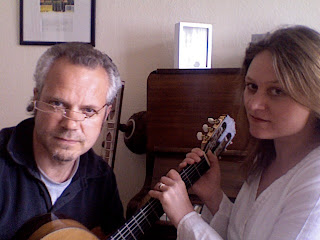 We were really just having a bit of a joke.
Robin was doing a very good Eric Morecambe impression, and I was wrestling the guitar from him. (Something I have to do most evenings otherwise he just keeps on playing...)

So if anyone has any strong opinion about the picture we should use then do feel free to let me know!
Posted by Anna at Monday, May 19, 2008