Take a Break - Play the Sitar

Today the house has been filled with the sound of the sitar.
As Robin enjoys his first day at home, he allowed himself to relax for a while, by playing his sitar.
It's a beautiful instrument in every way, with an exotic sound and intricate decoration.
Here's a photo I took a while ago: 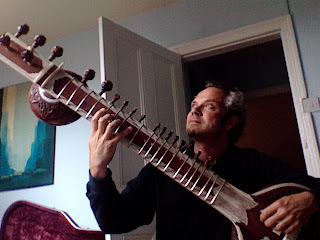 As I worked this morning, he pulled up a chair, and proceeded to play, warming up with 'Norwegian Wood', and swiftly making up his own arrangements, particularly enjoying the sitar's ability to bend a note up a complete major third, and even beyond, which he did repeatedly.
I'm not to sure that he even noticed me leaving the house for a couple of hours, in search of a birthday present for him, (it's on Wednesday) as he was still sitting there playing on my return.

He did take a break at one point, made his way into the lounge, and watched a DVD of Ravi and Anoushka Shankar, just to keep the momentum flowing.
There is an upside to a day off from playing his guitar.
It allows his nails a rest.
When playing the sitar you wear a mizrab on your finger, which is a strange device, and one that I find rather uncomfortable.
I'm not alone in this, George Harrison once described wearing a mizrab as feeling like, "a weasel holding onto the end of your finger."

I knew Robin couldn't stay away from the guitar for an entire day though. He's currently back in the music room and working on his right and left hand exercises.
Posted by Anna at Monday, May 12, 2008