Sorrento a Mandolin and a Music Box

Robin's first guitar concert on Crystal Serenity has gone very well.
His nails remained intact, much to my, and his, relief, and the audience were appreciative.
Although he probably had the least relaxing, 'post concert relaxation', that he has had for a long time.
Robin arrived at a big screen, just as United and Chelsea went into extra time, so he wasn't spared any of the drama.
I think his already high adrenaline levels will have taken some time to reduce.

But today he has gone into Sorrento, to have a look around, and I keep getting calls about how beautiful the area is.
Although one call was slightly more worrying, as he asked me to look up 'Nicola Spoto'.
The conversation went like this:

Robin: "Can you look up Nicola Spoto for me?"
Anna: "Why?" (I guessed there was more than idle curiosity at stake here.)
Robin: "Oh, no reason."
Anna: "Why?"
Robin: "OK, I've found a fantastic shop, with an incredible mandolin, in a case...!"

Whilst I pretended the 'phone had gone dead, I did look Spoto up. The best reference I could find was here, just scroll down the page and you'll see some nice pictures.

I called back.
Anna: "Are you still near the music shop?"
Robin: "No."
Anna: "Good, because he made very nice instruments."

Luckily Robin had decided that travelling home with his guitar, suitcase, hand luggage and a mandolin, may not have been practical.
He bought a music box instead. Phew. 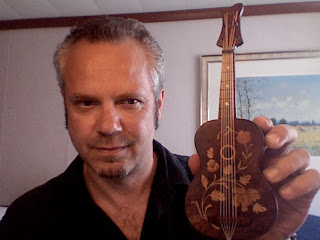