A Professor Calls and 'Luna Bianco'

A little light relief for a cold November day.
My grandmother came to spend the day with us here at the weekend.
Over lunch Robin announced that a rather eccentric Professor of music was calling round later in the afternoon.
'Friederich', the prof, specialises in old manuscripts, and had some pieces that he wanted Robin to take a look at.
My grandmother was very excited about this. She worked at a university for many years and has always enjoyed stimulating conversations.

Robin stressed that Friederich was quite a character, and, prone to arriving early for appointments.
He then made a big deal of preparing to take the dogs for a walk, whilst in reality he shut the poor canines in the kitchen, and hid upstairs.

Some time later the doorbell rang and son number one dutifully answered it, making polite conversation with the Professor in the hallway, before bringing him into the lounge and introducing 'Friederich' to 'Gran'.

After initial introductions, the professor pulled out the precious manuscripts from his battered briefcase and proceeded to extol the virtues of this fabulous music.

By this time I had also entered the room, and the prof excitedly pointed out bar 25, and started to sing along as he followed the music with his finger. All done very loudly and with rather eccentric hand gestures.

I left the room as the professor asked my grandmother, "Do you love ze muzic of Ludwig Van Beethoven?"
"Oh yes", she replied.

"Iz ze maestro returned from his valk yet?"
"No, not yet", was my response from the hall where I was taking refuge.

After further small talk and manic gesticulation from the professor, he announced that he needed to play this, 'sublime phrase' on the piano, and left the room.

Poor grandmother was looking decidedly bemused by the whole experience and asked son number one if the Professor was alright.
To which he replied, "Yes, of course".

But we couldn't keep the illusion up any longer, and Robin reappeared, pulling off a wig and glasses as he entered.
Fortunately Gran took it all in the spirit it was intended and hasn't stopped chuckling about it since.

This is the Professor, in all his glory: 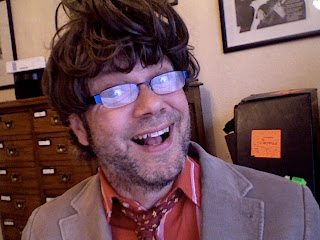 The wig was from the children's fancy dress box, and the shirt, well, that's a real 1970's shirt, a memento from a tour Robin did with Atarah Ben Tovim.
I'm just hoping that Robin hasn't taken this outfit over to Leeds University where he's teaching today...

It's also hard to believe that the same professor composed track 14 on Virtuoso.
'Luna Bianco' has a slow bossa nova groove with a short improvised solo in the middle.
The piece was inspired by the music of Antonio Carlos Jobim, which Robin has long admired and loved.
Posted by Anna at Monday, November 26, 2007