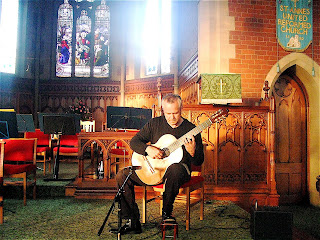 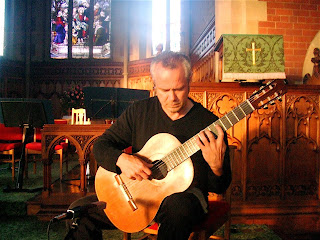 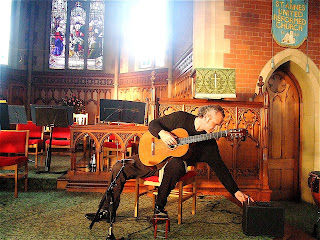 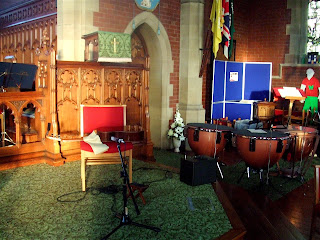 The concert itself went very well.
Audience, orchestra and soloist all enjoyed the experience and after the event Robin had the opportunity to speak to many people.
He was somewhat surprised to find himself talking to an ex-pupil, from 1981, who was brandishing a vinyl copy of, 'Virtuoso Music for Two Guitars' on Hyperion label, by Hill/Wiltschinsky!
We have recently re-released this album, plus a few bonus tracks, as 'Arrival'. You can read about it here, and listen to/buy on CD Baby, iTunes and many other digital outlets.
Posted by Anna at Monday, March 30, 2009

So does Mr. Hill come to the United States very often? We haven't had a guitarist in eons. I've done Rodrigo (on EH) with one of the Romeros and then with ... hmmm ... Parkening. But how often do orchestras bring in guitarists? Not often enough, it seems. I think we've had guitar maybe four times.

LOVE the Rodrigo, of course! I'd love to do that again.

You can call him Robin!!
Robin does go to the US quite a lot although doesn't have any concerto performances planned at the moment.
Speak to your orchestra, Robin just loves to play, whether the Rodrigo or one of his own concerti, he'll be there!
Thanks for taking the time to leave a comment.

Thanks for sharing this post about care on nails especially on guitarist, but even if I am not a guitarist I can get ideas here in taking care of my nails. Nice post! You can also visit Nail Art for more nail hints.

Hi and thanks for your comments.

I should add that Robin's nail care is for strength only, and is far from pretty, but it does the job!
However he is always looking for products that will protect his nails yet withstand many hours of playing, so do let me know if you think of anything!
Anna