Cabo San Lucas, Hard Rock Cafe, and the Tale of an Iguana

Yesterday Crystal Symphony spent the morning in Cabo San Lucas, Mexico, a very nice place indeed.
As you can see, the harbour is full of beautiful boats: 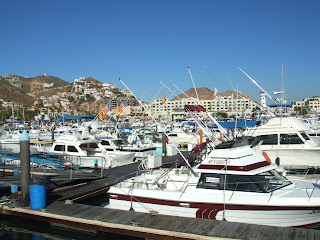 In the 40's and 50's Bing Crosby and John Wayne were frequently seen here as they enjoyed the deep sea fishing.

Even today there appears to be something for everyone, including a restaurant called, 'Squid Roe', and a 'Hard Rock Cafe': 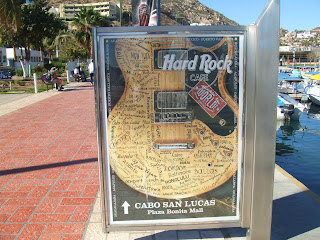 Then I had rather a surreal 'phone conversation with Robin which went something like this:

Robin: "It's really beautiful here, and I'm just stroking an Iguana, it's being held by a lady, (crackle, crackle, it wasn't a good line), ...wearing a sombrero."

Me: "Really, wow, an Iguana, that's fantastic. I suppose the lady should be wearing a sombrero, you are in Mexico."

Robin: "No, the Iguana's wearing the sombrero."

The conversation continued in this mode for some time...

Once back on board the photographic evidence was forwarded.
Here it is: 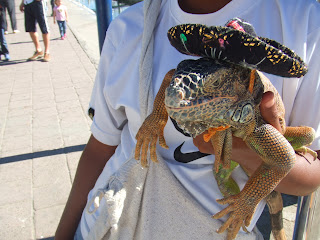 Word is also out that Robin's nail repair kit has proved very handy. Not only for nails and a President's eyebrow, but you can now add stiletto heel to the list.
Posted by Anna at Sunday, February 24, 2008

Where does one find an inguana sombrero?

Good to hear from you.
In case you ever need one, iguana sombreros are readily available in the town of Cabo San Lucas, Mexico.
Robin purchased a couple whilst there, but as we don't have our own pet iguana, they are currently being worn by various teddies!