On the 28th August Robin and the soprano Izzy Cooper performed a concert in Spain, 'Viva La Classica'.
I mentioned how it had gone at the time, rather briefly, as I was in the process of retrieving my son before he became stranded, when his Dad flew off to another concert.
You can read the post here.

So I was very pleased, when yesterday I was notified about a review, written by Jack Troughton, in 'Round Town News'.
I was even happier when I read the first line, "The golden blend of Izzy Cooper's powerful voice and the glorious guitar playing of Robin Hill made Viva La Classica an enchanting success."

The programme was a varied one:


Here's a photo, courtesy of Round Town News, of Robin whilst performing one of the solo pieces.
The more observant amongst you will notice the lack of footstool. He is in fact, on this occasion, using a special cushion, designed to mould to the shape of the leg. 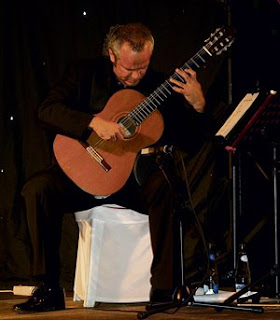 The review itself is a great one.
Izzy is described as a, "star", and Robin, "holds an audience spellbound", and one line I particularly like, " His fingers flew along the guitar's neck like the wings of a hummingbird."
But don't take my word for it. Follow the link and read it for yourself, "One Enchanted Evening".
Both Izzy and Robin are delighted at the reception they received, and have already been taking orders for the album they will be recording together.

My job, to find a time in their busy schedules to make that possible....and soon.
Posted by Anna at Wednesday, September 17, 2008