There's something quite exciting about receiving an item before it goes on general release.
So it was a great deal of pleasure that I opened a parcel from America which I knew would contain a brand new style of headphone.
My excitement turned to amusement when I discovered the headphones attached to a giant ear, with the message, "Hopefully you will have better luck trying to get them off your ear..."

10/10 for marketing so far.
Who has developed this new style headphone? 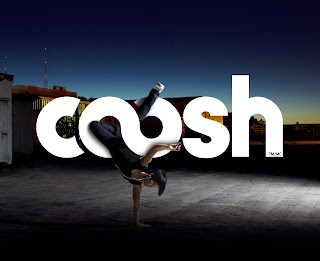 The claim, by Coosh, is that they have produced a, "comfortable and better sounding headphone and headset to hit the audio market for under $25."

I received a white pair and immediately planned my approach.
First, I was to test them out.
Initially whilst sitting comfortably in an armchair, and then a more extreme test as I head banged along to Led Zeppelin's 'Black Dog', before commencing a break dance routine on the kitchen floor.
I must say, that the Coosh claim stood up to the challenge.
Not only did they stay on, but they also felt good.

The second part of the challenge had to wait until Robin's return from a concert tour.
I wanted him to listen with his highly critical musician's ears.
His first impressions were very good.
Comfortable to wear and a nice sound.

So we did a comparison test with two other makes.
Firstly, a top of the range, and highly expensive set of noise reduction headphones.
I must say that the noise reduction 'phones did win on sound quality.
But, when compared to a 'typical' ear bud style headphone, then Coosh can certainly hold there own, and the added comfort would make them our choice of headphones.

My only regret is that they didn't send me a pink set.
In this male orientated house I may have stood more of a chance of keeping hold of them.
And as far as the break dancing, well, unfortunately I didn't manage to get any footage of me spinning on the kitchen floor, but luckily, these guys saved me from having to perform a rerun and sustain any permanent damage: 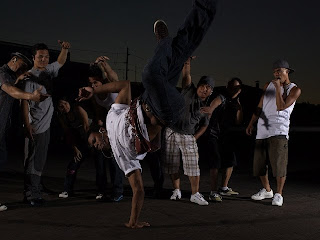 To see the Massive Monkees put Coosh headphones through their paces, just watch this video....
Posted by Anna at Wednesday, September 24, 2008