Bananas on the High Seas and Bottom E

When sitting amongst an audience, waiting for a concert to begin, have you ever thought about the musician you are about to watch and wondered what they are doing backstage?

Every artist has their own routine, but most will be warming up, and in Robin's case this means scales and arpeggios.
So I was quite surprised to receive this photograph, taken immediately before going on stage for his first concert on the QM2. 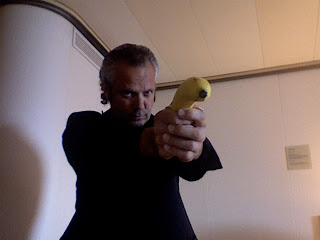 Yes, it is Robin brandishing a banana in rather a menacing fashion.
From experience I know that shortly after this picture was taken he will have eaten the banana.
As most will know, bananas are an excellent way of giving yourself an energy boost when you most need it.
Performing before an audience is both mentally and physically tiring when a soloist, (funnily enough Robin never feels like this when playing his electric guitar) so pre concert is the perfect time to boost those levels.

He's not precious about this.
He doesn't demand a dressing room full of bananas in various stages of ripeness so that he can select the perfect one. In fact on many occasions event organisers have commented on how self reliant and low maintenance he is!
It's just if he can, he will eat one.
Every little bit helps.

Writing this has also reminded me about fish.
From choice Robin always eats a good meal before a concert.
Some musicians don't. They wait and eat afterwards.
But Robin wouldn't entertain performing without a hearty meal.
His food of choice is fish.
To explain why, you can read an old post about fish being brain food for musicians, here.
For those interested in musicians and their brains, you can also read this post from 2007, 'Musicians Have Bigger Brains,' which I wrote after watching a particularly interesting programme.

The banana served him well and Robin went on to deliver a great concert.
Despite the incredibly rough sea, and many passengers feeling decidedly unwell, there was an excellent turnout and have been many nice comments since.
Robin was delighted to receive one in particular, "You play like a machine gun," and had obviously made quite an impression on this chap, as he remembered meeting Robin once before and went on to quote the time and place! (April 4th, New York, apparently)
It must be a very nice feeling to know that you have made such an impression on an individual that they remember the meeting so well.
Posted by Anna at Friday, September 12, 2008

Must be the potassium in all those bananas! This post made me smile - Thanks!

I'm glad you enjoyed it.
And also thanks for taking the time to leave a comment, that made me smile!