We have decided that we have very musical dogs.
It isn't surprising really, since puppy hood they have grown up surrounded with all types of music.
This morning was a prime example.
Robin was practising in the music room and my faithful friends were by my side as I worked.
The music stopped, the dogs pricked their ears up, then Robin appeared, with guitar and sat down.
The dogs sat down.
Robin started to play.
He wanted to run through 'La Catedral' by Agustin Barrios, to an audience of one (which was me) and two Labradors.
Miss Bimps and Milly put their heads on their paws resigned to the fact that their morning walk was about to be delayed.

La Catedral is in three movements, Preludio, Andante Religioso and Allegre Solemne.
At the end of the fist movement I was spellbound and the dogs didn't move.
The second movement, still nothing.
At the end of the final movement both dogs got up, and did the nearest they could to clapping their paws, by wagging their tails and circling Robin as if they were rounding up a flock of sheep.
As they used to power of positive thinking to stalk their prey, Robin gave in to the pressure, put his guitar away, and took them for a walk.
But how did they know the piece had finished?
I can only assume that we have very knowledgeable and musical hounds...

Here they are, Miss Bimps: 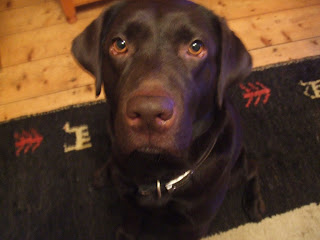 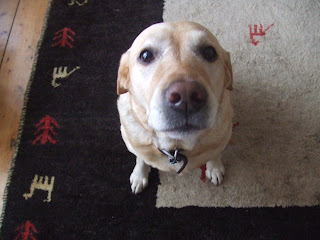