As we head towards the end of another year I thought it would be interesting to see just what this particular musician has been doing over the last twelve months.
I must say I was surprised as I looked back over events and worked out a few rather astonishing statistics.

In the last year alone Robin has visited 27 different countries! But that isn't the whole picture as many of them he has returned to a number of times. For example, India 3 times, Italy 11, USA twice, Brazil 4 times and Norway a staggering 15 times.
So anyone thinking about a career in music really needs to be prepared to travel extensively.

All of this obviously requires longs spells away from home which can be difficult, particularly when missing important events.
This frequently happens and Robin has missed both our children's birthdays this year and also the funeral of my much loved Grandmother. This was particularly difficult for him. To be away from home at such trying times is hard indeed.

But there have been many other events.
Two albums have been released, the first in March with, 'Hill/Wiltschinsky Duo Soler Sonatas', and the second, recorded in January and released in September, 'Cancion' Izzy Cooper & Robin Hill and 'Les Filles De Cadiz'.

But there have also been problems.
One particularly worrying incident was, 'Too Much Inflammation...', which was the result of a nasty ant bite, ironically sustained at home and not during one of the four trips up the Amazon, and the photograph of the offending hand has been taken up by insect bite sites around the world!

Travelling always has its difficulties but this year we have dealt with suspect packages causing the evacuation of the airport and consequently missed planes. Luckily, through sheer determination and numerous 'phone calls between agents in London and America, rescheduled flights were arranged and Robin arrived just in time.
Not so with the elements.
He spent a very frustrating few days in Amsterdam, stranded after all airports were closed due to Volcanic ash. Eventually he made it home via trains and boats, but it ate into the few precious days he was meant to have at home.

From my point of view, I was delighted to have reached the milestone of, 'Life of a Musicians 4th Birthday,' which is quite an achievement in the blogging world, especially when you consider we are now posting the 714th blog post...

I even allowed myself the luxury of a blog post all to myself, after a number of requests from regular readers. Funnily enough, 'Anna Hill's 'Unofficial' Desert Island Discs' has become a very popular one and continues to be visited regularly.

So, looking back it has been an eventful and fulfilling year.
Once again I would like to thank all our regular readers for their continued support, and also those who just dip in from time to time.
Here at Hillhouse we hope you all had a very nice Christmas and wish each and every one of you a very happy, healthy and prosperous New Year.
Posted by Anna at Wednesday, December 29, 2010 No comments:

From New York to Cartoon...

It has been a long time since my last update, but then you all had 712 previous posts to look back through!

Whilst quiet on the writing front it has been very busy on the musical one.
Robin has performed 8 concerts and travelled to many places including the Norwegian Fjords, Italy, Greece, Croatia and finally New York.

Here is the welcoming sight of the Statue of Liberty, albeit a little hazy: 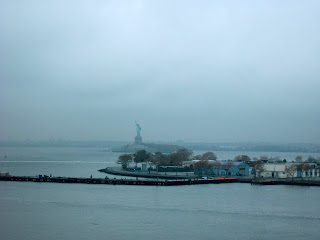 And the familiar New York skyline: 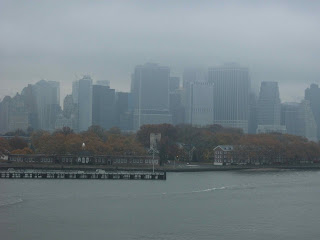 Plus the spectacular Verrazano Bridge: 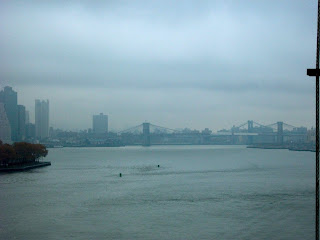 But despite seeing some incredible places Robin was very sad to be away from home on youngest son's 8th birthday, the downside for the travelling musician is they frequently miss these significant family moments.

Now home again, recording of some 'warming' flamenco style pieces is underway, which has been particularly beneficial given the 'big freeze' currently sweeping across the UK.

Here the poor ducks have been reduced to a minimal swimming area, and believe it or not this is actually a very heavy frost rather than snow! 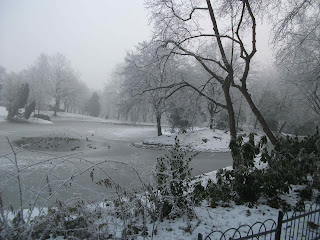 Another problem with frequent trips away from home is that 'others' take advantage of your comfortable armchair and refuse to give it back.... 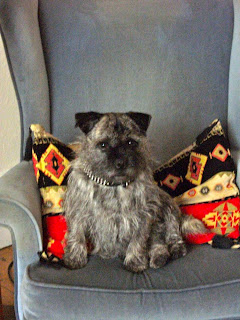 And if you are wondering how a musician relaxes when at home, well, they draw pictures of fictitious musicians of course! 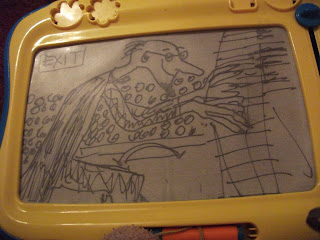